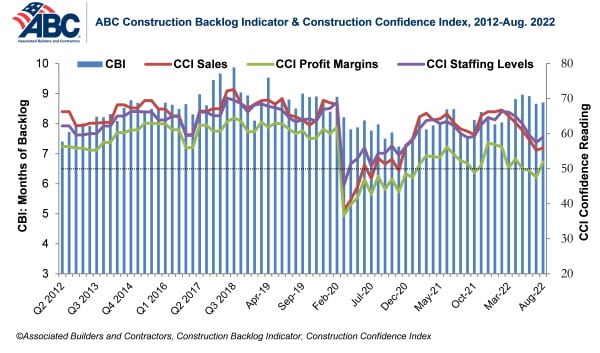 Associated Builders and Contractors (ABC) has reported that its Construction Backlog Indicator remained unchanged at 8.7 months in August, according to an ABC member survey conducted Aug. 22 to Sept. 7. The reading is a full month higher than in August 2021.

Backlog is down from the levels of the second quarter of 2022 but remains higher than at any point from March 2020 to March 2022. While the CBI reading fell for contractors in the South in August, it remains the U.S. region with the lengthiest backlog.

“Despite the high risk of recession, contractors collectively expect sales, employment and profit margins to grow over the next six months,” said ABC Chief Economist Anirban Basu. “Backlog is down from the cyclical peak in early 2022 and has been roughly flat in recent months.

“The buoyancy of the nation’s nonresidential construction marketplace is really quite remarkable,” said Basu. “Rising interest rates have already driven the single-family homebuilding market into recession, but brisk nonresidential activity continues. Many nonresidential contractors are operating at capacity, and their principal frustrations relate to supply-side issues like worker shortages, equipment delivery delays and elevated materials prices, as opposed to demand for their services.”