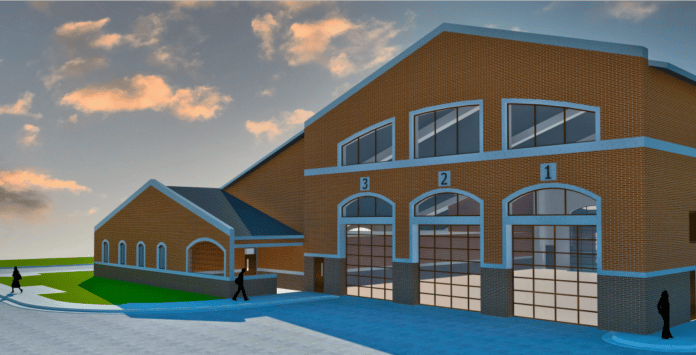 Fayetteville firefighters held a groundbreaking to start construction on a new Fire Station Four on Aug. 30. The new state-of-the-art facility, located at 4210 Bragg Blvd., will be centrally located to improve response in high-demand areas.

Fire Station Four is expected to become the busiest in the city as it will be immediately accessible to several major travel routes with three bays for fire trucks. The relocation of the facility will also include a logistics facility where fire equipment, spare vehicles and office supplies can be stored. When complete, it will accommodate up to ten firefighters on duty at any given time with ten bedrooms and five restrooms with showers.

“The investment in this long-awaited project illustrates the Council’s commitment to the community and to the staff of the Fayetteville Fire Department,” said Fire Chief Mike Hill. “It also has the potential to facilitate one of the greatest service enhancements I have witnessed in my career.”

The $9.4 million construction project is estimated to be completed within 18 months and will replace the existing station that opened in 1960.

With 18,442 sq. ft. of space, a variety of enhanced features and community space will be available. The new station will include decontamination equipment to remove exhaust from the air which is a safety measure for firefighters as cancer is a concern for firefighters across the nation. Staff can also use washers that are designed to reduce contaminants on uniforms. Turnout gear space will be a first for Fayetteville where firefighters will be able to use the space to store pants, boots, coats and gloves separate from living and working areas. A community room is included in the plans for neighborhood watch meetings and public safety classes.

Improving public safety infrastructure is a priority for the Fayetteville City Council members who recently took action to put $97 million in three bond referendums on the November ballot. If voters approve the $60 million in public safety bonds, more fire station renovations and expansions could be possible across the City.