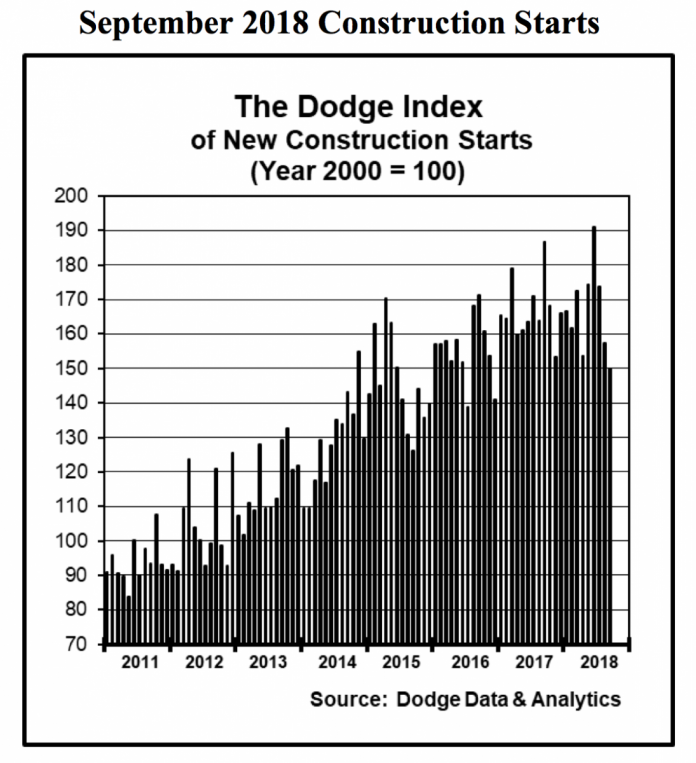 New construction starts in September fell 5% from the previous month to a seasonally adjusted annual rate of $709.6 billion, according to Dodge Data & Analytics. The September downturn followed 9% declines in both July and August, as the pace of construction starts has now pulled back for the third month in a row after reaching the current year’s high in June.

By major sector, nonresidential building weakened further in September, sliding 6%. Nonbuilding construction dropped 13% in September, due to sharp retrenchment for the electric utility/gas plant category while public works held basically steady. Residential building was the one major sector posting a gain in September, rising 2%. Through the first nine months of 2018, total construction starts on an unadjusted basis were $599.9 billion, down 1% from the same period a year ago.

“The pace of construction starts has clearly slowed over the past three months, following what was unsustainably high levels during May and June,” said Dodge chief economist Robert A. Murray. 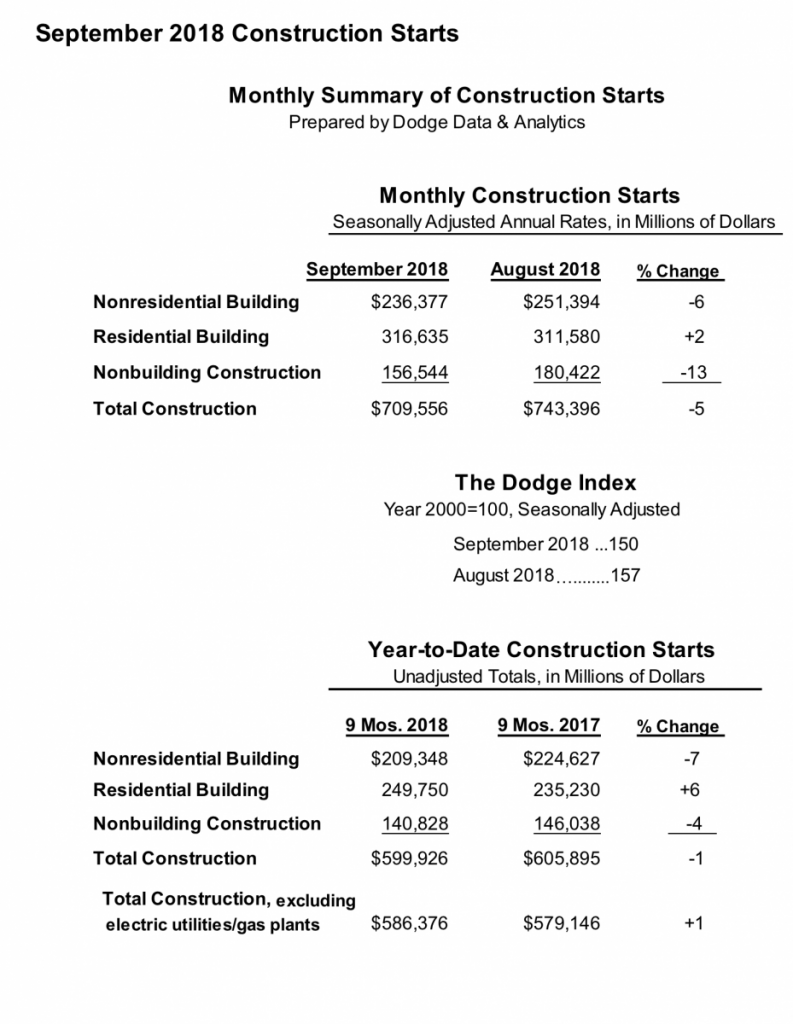 “Since construction starts on a monthly basis are often subject to wide swings, it’s useful to look at the recent pattern of activity on a quarterly basis,” Murray said. “After sliding 7% in the fourth quarter of 2017, total construction starts strengthened 3% in this year’s first quarter and then advanced another 4% in the second quarter. The loss of momentum in July, August, and now September produced a 7% decline for the third quarter, in effect returning the pace of construction starts to the level reported at the end of last year.

“It’s true that the rate of growth for construction starts has decelerated more in 2018, but it’s still too early to say that the construction industry has rounded the peak and is now in decline. There are of course mounting headwinds affecting construction, namely rising interest rates and higher material costs, but for now these have been balanced by stronger economic growth, some easing of bank lending standards, still healthy market fundamentals for commercial real estate, and greater state financing for school construction and enhanced federal funding for public works.”

Nonresidential building in September was $236.4 billion (annual rate), down 6%. The commercial building categories as a group fell 13%, retreating for the third month in a row after the robust volume back in June that included the start of such projects as the $1.8 billion Spiral office tower in the Hudson Yards district of New York NY and a $665 million office tower on North Wacker Drive in Chicago IL.

Hotel construction in September was unchanged from the previous month, helped by the $114 million hotel portion of the $180 million Great Wolf Resort and Water Park in the Stockton CA area. The commercial garage category was the one commercial project type to report a September gain, rising 40% after a lackluster August. Manufacturing plant construction also showed improvement from a lackluster August, climbing 36% with the lift coming from the start of a $800 million aluminum rolling mill in Ashland KY and a $190 million research and design facility expansion in Fitchburg WI.

The institutional side of the nonresidential building sector dropped 6% in September, a less severe decline than what was reported for commercial building. Educational facilities, the largest institutional building category, retreated 13% even with the September start of a $110 million engineering building at the University of Tennessee in Knoxville TN. Large high school and middle school projects that reached groundbreaking in September were located in Euclid OH ($85 million), Rockville MD ($69 million), and Springfield PA ($68 million). Healthcare facilities fell 26% in September, following the 28% gain that was reported in August, and the public buildings category (detention facilities and courthouses) plunged 37%.

The most noteworthy area of strength in September was the transportation terminal category, surging 153%, as the $700 million concourse expansion project at Denver International Airport was entered as a construction start. (The $650 million main terminal upgrade at Denver International Airport was entered as construction start in July.) Also advancing in September was the amusement-related category, up 11% with the boost coming from the $220 million Lexington Convention Center expansion in Lexington KY and the $89 million addition to the Milwaukee Symphony Center in Milwaukee WI. Church construction starts were able to show improvement in September, increasing 17% after very weak activity in August.

Nonbuilding construction in September was $156.5 billion (annual rate), down 13%. The decline was due mostly to the electric utility/gas plant category plummeting 76% following its 43% jump in August. The largest power-related projects entered as September starts were considerably smaller in scale than in previous months, and included a $146 million power transmission line in the Las Vegas NV area, an $89 million solar power farm in Springfield SC, and a $50 million solar power installation in Ludlow VT.

The public works categories as a group increased a slight 1% in September from the previous month. On the plus side, the miscellaneous public works category rose 12%, and included the start of the $1.4 billion Arbuckle II pipeline (that will transport natural gas liquids from Oklahoma to Texas) and the $1.1 billion Cactus II pipeline system (that will transport crude oil from the Permian basin to the Corpus Christi TX area). Water supply construction in September advanced 15%, helped by the start of the $159 million Catskill Aqueduct repair and rehabilitation project in Catskill NY.

Residential building in September was $316.6 billion (annual rate), up 2%. Single family housing rose 2%, rebounding slightly from a 5% drop in August which had followed what was essentially an extended plateau from late 2017 through July. By geography, September showed this pattern for single family housing relative to August – the Northeast, up 13%; the West and South Atlantic, each up 3%; the South Central, down 1%; and the Midwest, down 2%.

Through the first nine months of 2018 single family housing showed this pattern compared to last year – the West, up 12%; the South Atlantic and the South Central, each up 6%; the Midwest, up 2%; and the Northeast, up 1%. Multifamily housing in September grew 1%, although it was 18% below the strong volume reported in this year’s first quarter. There were six multifamily projects each with a construction start cost of $100 million or more that reached groundbreaking in September, compared to eight such projects in August.

The 1% decline for total construction starts on an unadjusted basis during the January-September period of 2018 was the result of a varied pattern by major sector. Nonresidential building year-to-date dropped 7%, as a 15% increase for manufacturing plant construction was outweighed by declines of 6% for commercial building and 11% for institutional building. (The year-to-date performance for nonresidential building weakened compared to what was reported with the August 2018 construction starts report since the comparison now includes very strong activity in September 2017, which was boosted by a $6.0 billion ethane cracker plant in Pennsylvania, the $4.0 billion Delta Airlines terminal at LaGuardia Airport in New York NY, and the $1.7 billion 50 Hudson Yards office tower in New York NY.)

The year-to-date performance for nonresidential building is expected to strengthen during this year’s closing months.) Nonbuilding construction year-to-date slipped 4%, as a 7% increase for public works was countered by a 49% slide for electric utilities/gas plants. Residential building was the one major sector to see a year-to-date increase, rising 6% with single family housing up 7% and multifamily housing up 5%. By geography, total construction starts during the first nine months of 2018 showed this behavior relative to a year ago – the Northeast, down 19%; the West, down 4%, the Midwest, up 1%; the South Atlantic, up 6%; and the South Central, up 12%.

Sharp jump in owners canceling or delaying construction projects across the country, new survey finds, putting many jobs at risk 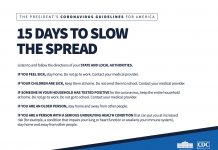