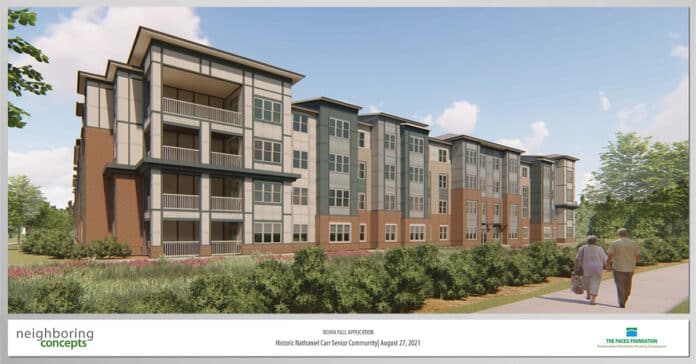 The Paces Foundation and Soho Housing Partners will host a ground-breaking ceremony in Charlotte Tues., Nov. 29, to launch construction of a $31 million apartment community for seniors.

The Historic Nathaniel Carr site will create 120 units of affordable housing for seniors. Officials will speak at the ground-breaking starting at 2 p.m.

With a cost projected to be over $31 million, the project will be financed in partnership with Fifth-Third Bank, Raymond James Financial, LISC, Barings, and the City of Charlotte. The community will be named Historic Nathaniel Carr Senior and will be constructed within the historic West Boulevard neighbourhood.

The 4.5-acre site on West Boulevard off Tyvola Road was purchased by the West Side Community Land Trust on May 31 for $1.1 million.

The development will be named in honor of local African American developer Nathanial Carr, a Black farmer and developer and is credited with creating the first neighborhood in the West Boulevard corridor at a time when Black land- and homeownership was hard to achieve.

Construction – the land trust’s largest project to date – is expected to be completed in fall 2023.