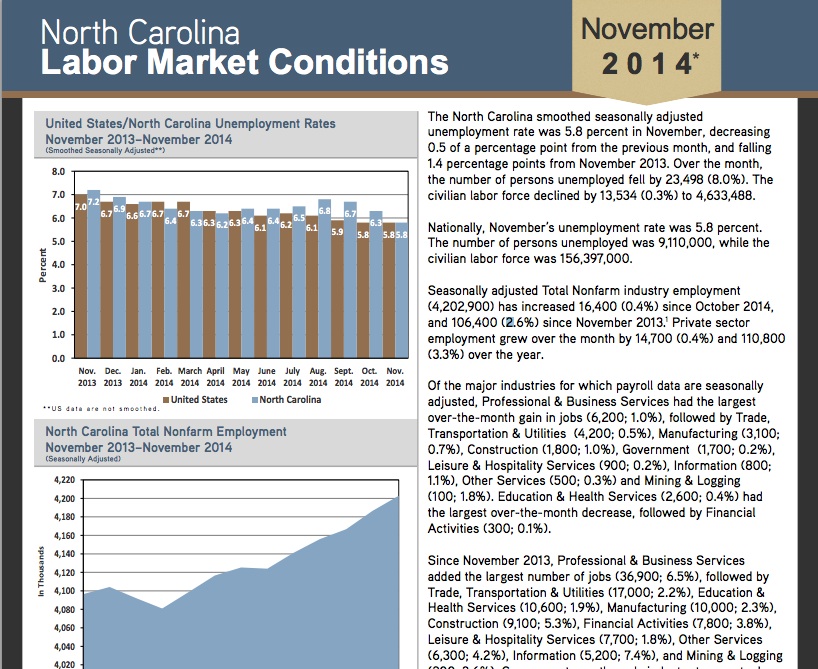 Signs of a revitalizing economy are apparent in North Carolina’s jobless rate, which  fell to 5.8 percent in November, the lowest since May 2008, as the state’s economy gains force in the second half of the year.

The Labor & Economic Analysis Division in the N.C. Department of Commerce has reported that in November, the construction sector had a one per cent gain in jobs (1,800), on a seasonally adjusted basis. Since November 2013, the number of jobs increased by 9,100 (5.3 per cent.) See North Carolina Labor Market Conditions.

Overall, the state’s jobless rate fell from 6.3 percent in October and has dropped from 7.4 percent one year ago, even though today’s wages have not caught up to pre-recession pay levels, the Raleigh News and Observer reported.

North Carolina’s unemployment rate, which has lagged the national average, matched the U.S. rate in November, but the nation as a whole dropped below six per cent two months ahead of North Carolina.

On an annual basis, North Carolina has added 106,400 jobs in the 12 months, for an annual growth rate of 2.6 percent, one of the fastest in the country and significantly exceeding the national rate of 2 percent.

“Another thing to notice here is just how broad the gains are,” Kaglic said. “There’s growth everywhere.”