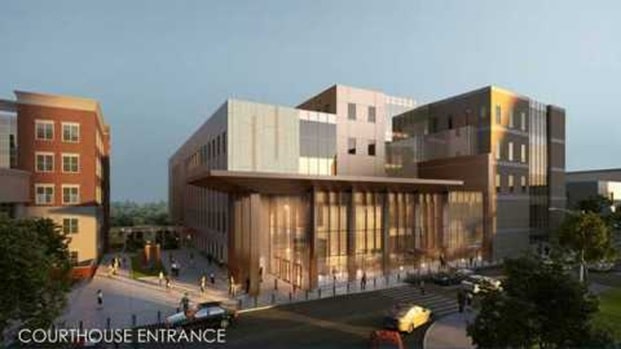 Balfour Beatty, in joint venture with Samet Corp., is partnering to deliver the new Forsyth County Courthouse in Winston Salem.

The expanded building will feature 18 judicial spaces, including courtrooms and hearing rooms, rightsized to functionally accommodate judicial staff and the public. The judicial spaces will be situated on the first three floors of the building arrayed in double-loaded corridors to improve wayfinding and ease-of-access throughout the courthouse. Additionally, the facility will feature waiting areas specifically designed to provide open, daylit public spaces that lead into various courtrooms.

Balfour Beatty and Samet are providing construction manager at risk services to deliver the newly modernized courthouse that is strategically designed to improve security allowing for the placement of security checkpoints, card access and video surveillance tools to further safeguard the public and judicial staff. The courthouse will be fully accessible to accommodate members of the public with disabilities and will include infrastructure allowing for state-of-the-art technology to be utilized to efficiently conduct judiciary operations and bring the Forsyth community’s justice standards to the 21st century.

Designed by CJMW Architecture, SLAM and O’Brien Atkins, the project is slated for delivery in April 2023.