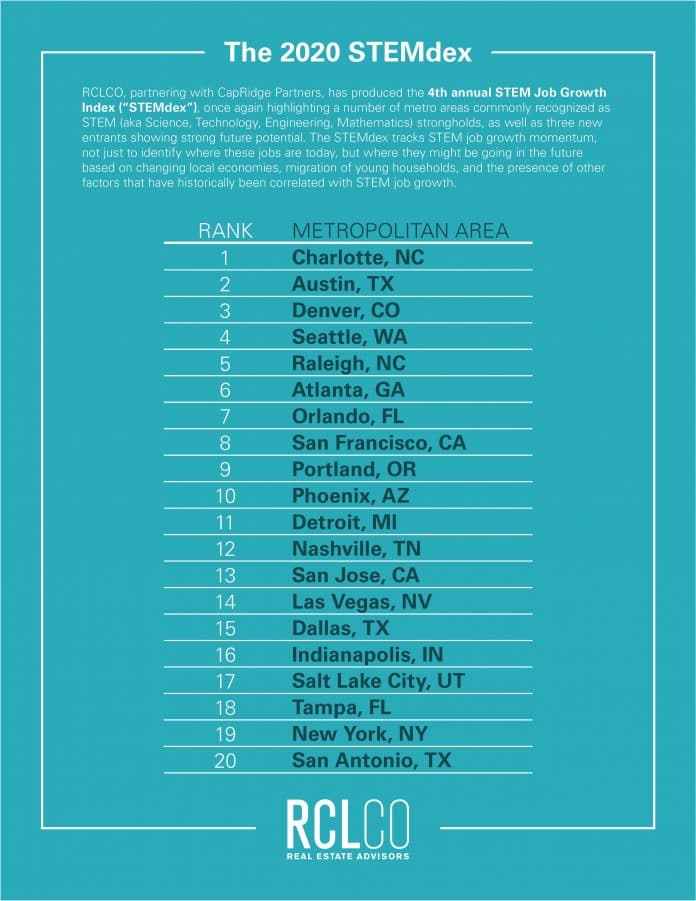 North Carolina — and especially Charlotte — are leading in the nation in growth among the top markets for STEM (Science, Technology, Engineering or Math) job growth, according to a report from RLCCO Real Estate Advisors.

In fact, Charlotte vaulted to the top spot among the nation’s 38 metropolitan areas.  Raleigh ranked fifth (below Austin, Denver and Seattle).

“Rather than simply identifying where STEM jobs are today, the STEMdex seeks to understand where they might be going in the future based on changing local economies, migration of young households and other key factors to help real estate investors, policymakers and local governments understand which geographic areas and job categories will play the largest role in economic growth in the coming decades,” RLCCO said in a statement.

The top 20 metropolitan areas in the 2020 edition of the STEMdex are as follows:

“Quality of life, favorable cost of doing business, and strong job markets – especially STEM jobs – are the leading indicators for healthy investment markets,” said Adam Ducker, RCLCO’s senior managing director. “Understanding where these jobs exist today and where they may concentrate tomorrow is essential to decision makers and real estate investors, as STEM jobs will likely play an even more significant role in economic growth in a post-COVID world. We would expect to see regions with more STEM jobs recover from this recession much faster than regions whose jobs are more concentrated in effected industries.”

RCLCO partnered with CapRidge Partners in 2016 to create the STEMdex as a tool to identify which of the largest metropolitan areas in the United States are primed for growth in STEM-based industries. The analysis focuses on metrics in four major areas RCLCO and CapRidge find to be paramount to the growth of STEM jobs: Population and Economic Growth, Workforce Quality, Quality of Life, and the Cost of Doing Business. In total, RCLCO identified and weighted 26 different indicators they believe best characterize the four major categories and can quantify their impact on the STEM job market.

STEM jobs pay an average of $84,480 compared to $37,020 for non-STEM occupations. The Bureau of Labor Statistics forecasts STEM jobs to grow at a rate of over 76% higher than non-STEM job growth nationwide.

The severe economic impacts of COVID-19 have caused the United States to enter a recession, effectively ending the longest economic expansion the country has ever seen. Hit particularly hard have been jobs in the retail, restaurant, tourism and hospitality industries.

However, STEM jobs, with their historically lower rates of unemployment and higher wages, may prove to be more resilient, as many STEM-related jobs are better-equipped to transition toward remote working environments. Additionally, some STEM jobs, particularly those related to public health, may even see a renewed importance as we enter a post-COVID economy, the statement says.