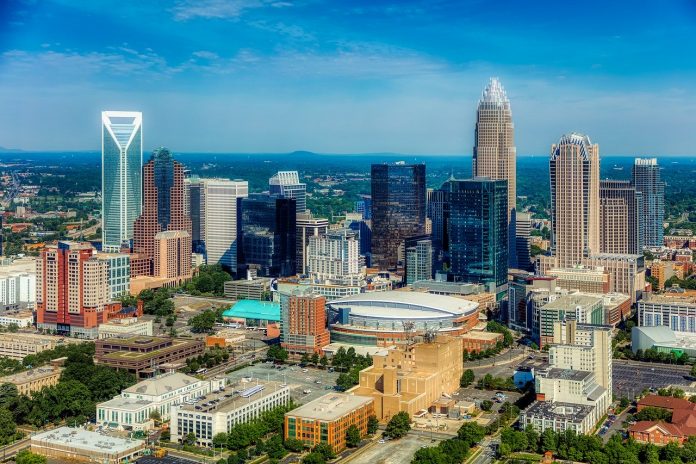 How are North Carolina contractors faring during the COVID-19 crisis? The Charlotte Observer interviewed representatives of some construction firms about how they are managing safety protocols while continuing work as an essential service.

Considered an essential business under the shelter-in-place order, major commercial construction projects in the Triangle continue — while facing a changing work environment during the coronavirus outbreak.

“l have to say productivity may be somewhat less than 100 percent, just because of the social distancing and the measures that are taking place,” Mike Hampton, chief administrative officer at Choate Construction, told the newspaper. “But jobs are fully staffed. Thankfully our industry is considered an essential part of the state. This is providing a lot of people work, people that won’t be hitting the unemployment payrolls.”

The company has ordered hand sanitizer in bulk for each construction site, instructed workers not to share items like pens for document signings, and to take breaks outside and apart from one another.

Hampton said that contractors in North Carolina have been banding together to develop safe practices and sharing them with other firms.

“I don’t have a crystal ball to tell you which projects we will have to pull back from,” Hampton was quoted as saying. “We’ll have to wait and see like the rest of the country … at least we’re able to keep these people employed. That’s the most important thing.”

“(COVID-19) is obviously affecting us,” said Baker Glasgow, the company’s vice-president of construction  “Everything has dramatically slowed down. There are people who aren’t coming to job sites. There’s kind of a labor shortage in general. There is a lot more of tremendous attention to safety precautions on job sites which starts to slow some production down.”

“We’re really putting emphasis on the safety of all the employees and workers,” he said. “We know that inevitably our schedule will be affected, and to what degree is to be determined.”

“Everything’s calm here. We’re keeping our distance from each other,” the Observer quoted a Spanish-speaking subcontractor at the site. He said there’s more handwashing going on and that he feels safe working in open air.

“This is serious, but until now, we haven’t stopped working. We’re being careful,” he said.

“A lot of contractors have taken new measures and steps like additional handwashing stations, spacing out the crews and the timing,” said Jeff Sheehan, a partner at Trinity Capital Advisors. Their projects include The Venable Center in Durham, Park Point at Research Triangle Park and other office spaces in the Triangle.