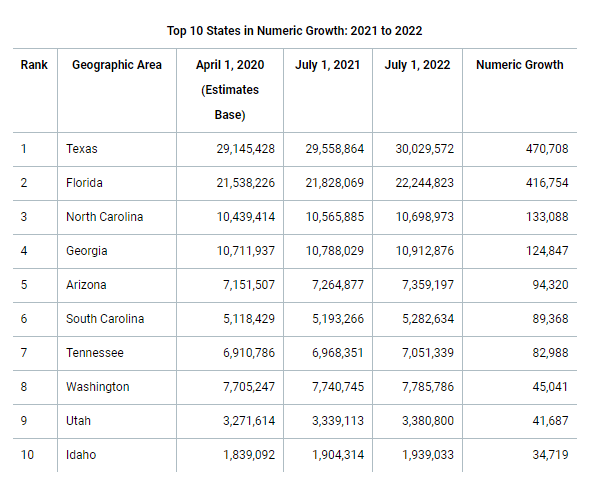 North Carolina added 133,088 new residents from domestic migration over the last year, the third highest total nationally, according to new data from the U.S. Census Bureau.

Net international migration — the number of people moving in and out of the country — added 1,010,923 people between 2021 and 2022 and was the primary driver of growth. Positive natural change (births minus deaths) increased the population by 245,080.

“There was a sizeable uptick in population growth last year compared to the prior year’s historically low increase,” said Kristie Wilder, a demographer in the population division at the Census Bureau. “A rebound in net international migration, coupled with the largest year-over-year increase in total births since 2007, is behind this increase.”

Texas was the largest-gaining state in the nation, reaching a total population of 30,029,572. By crossing the 30-million-population threshold this past year, Texas joins California as the only states with a resident population above 30 million.

Florida was the fastest-growing state in 2022, with an annual population increase of 1.9%, resulting in a total resident population of 22,244,823.

“While Florida has often been among the largest-gaining states,” Wilder noted, “this was the first time since 1957 that Florida has been the state with the largest percent increase in population.”

It was also the second largest-gaining state behind Texas, with an increase of 416,754 residents. Net migration was the largest contributing component of change to Florida’s growth, adding 444,484 residents.