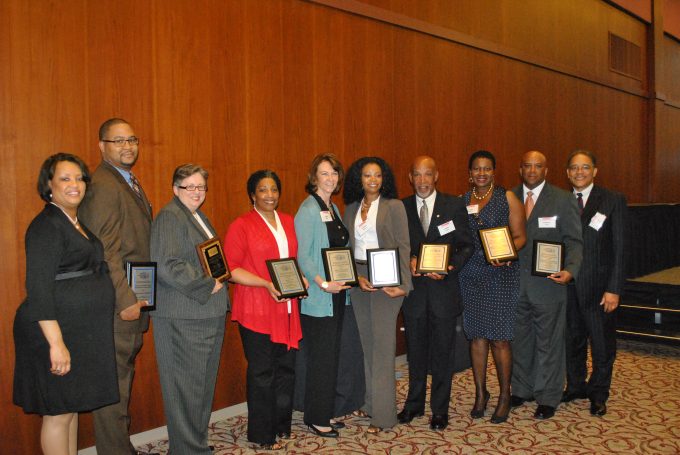 The Frank B. Turner Award was presented  to a career state employee during the 31st annual State Construction Conference at the McKimmon Center in Raleigh. Additionally, the State Building Commission recognized an outstanding architecture and engineering firm and the Office for Historically Underutilized Businesses (HUB) presented six Good Faith Effort Awards to HUB leaders.

The event, which attracted more than 1,100 contractors, subcontractors, engineers, architects, landscape architects and representatives of state agencies, is presented by the State Construction Office of the N.C. Department of Administration.

The Frank B. Turner Award was presented to J. Donald Edwards Jr., former Physical Plants Director of Cherry Hospital in Goldsboro.  Given annually since 1983, the Turner Award recognizes a state government employee for dedicated public service and outstanding professional contributions to the built environment.

Edwards began his 30-year career at Cherry Hospital in 1979 as a Plant Engineer and went on to become the Physical Plants Director in 1982.  His family has a historical connection to Cherry Hospital: His father, Donald Edwards Sr., was the Farm Superintendent for 37 years.

A Certificate of Merit from the State Building Commission was presented to Clark Nexsen Architecture and Engineering for outstanding achievement in the UNC-Charlotte Residence Hall Phase IX Spruce Hall project.

HUB Firm: Katie Tyler, President/CEO of Tyler 2 Construction, which has been in general contracting for 28 years, in recognition of its outstanding achievements as a historically underutilized business.

HUB Advocate:  Dorothy Vick, HUB Coordinator for UNC-Charlotte, in recognition of her dedication in promoting and advocating for historically underutilized businesses.

Industry/Agency – Individual:  Patrice Gilmore, Diversity Program Manger/Project Manager with LendLease Inc., in recognition of her exemplary diligence and accomplishments in promoting the HUB Utilization on the UNC Bell Tower Project.