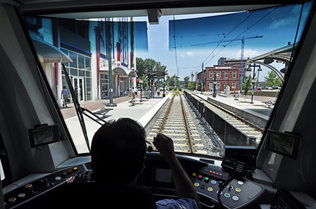 Federal, state and local leaders gathered last week for the groundbreaking of the Lynx Blue Line extension, which will extend the system from uptown to UNC Charlotte.  Federal Transit Administrator Peter Rogoff and Gov. Pat McCrory joined Mayor Patsy Kinsey and other Charlotte area leaders for the ceremony to mark the start of the 9.3-mile extension.

The Charlotte Observer reports the $1.16 billion project will double the length of the existing 9.6-mile light rail system, which currently runs along South   Boulevard from uptown to Interstate 485. Construction is projected to create 7,600 jobs.

So far, CATS is finishing the pre-construction phase of the project, which includes acquiring land for right-of-way, CATS CEO Carolyn Flowers said. Construction is expected to start in the fall. Other plans for transit lines are also in the works, but much of the expansion will depend on money.

The extension is expected to serve 18,000 Charlotte area residents on an average weekday, compared with the 16,000 who use the existing segment. It’s expected to open in spring 2017.  The 11 additional stops will the line’s total stops to 26.  Half of the money for the project came from a grant from the Federal Transit Administration, the N.C. Department of Transportation provided about a quarter. The balance comes from a local half-cent sales tax.

Rogoff said the extension will give commuters an alternative to sitting in traffic on Interstate 85 and U.S. 29, two routes that connect uptown and University City.  “The Blue Line extension is an important step in providing the world-class transportation system that Charlotte deserves,” Rogoff said.

The city has started building the first 1.5 miles of a streetcar line that will run from Time Warner Cable Arena to Novant Health Presbyterian Medical Center in Elizabeth. It is expected to open in spring 2015.

The city is also applying for a TIGER (Transportation Investment Generating Economic Recovery) grant for the expansion of another 2.5 miles of the streetcar project.  Flowers said CATS hopes to continue the vision for the rest of the transportation network, but does not yet have a method to pay for future projects.  These projects include extending the streetcar to the airport and building the Red Line commuter rail to northern Mecklenburg County.

The Blue Line extension has been a long time coming. McCrory said planning for the Blue Line started in 1995 when he was mayor, and the city received the first federal grant in 1998. The light rail’s first section opened in 2007.  “This connects the region to education, to work, jobs, to entertainment,” McCrory said. “And this is the fulfillment of one part of a major dream that so many of us were a part of.”  Read More.