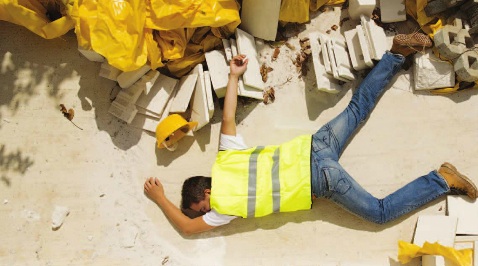 Construction associations and businesses are stepping up their safety training initiatives after the North Carolina Department of Labor (NCDOL) reported the doubling of the number of workers killed on the job in 2014, with a significant portion occurring in the construction industry.

The NCDOL reported that 44 people died in work-related accidents, up from 23 in 2013.  All of the victims were men, and all were classified as “laborers” – and disturbingly, 19 of the workers who died were on construction sites, 12 more than in 2013.

“Labor Commissioner (Cherie) Berry was right when she called these deaths tragic,” said Dave Simpson, interim president and CEO of Carolinas Associated General Contractors (CAGC). “We are working every day to offer the training needed to avoid these tragedies and we will be ramping up efforts in light of the latest numbers.”

NCDOL states that statistics demonstrate the majority of workplace injuries occur from improper training, failure to recognize hazards, and inability to execute the proper response to remain safe around those hazards. A majority of injuries occur the first week on the job.

“To hear that workers are getting injured on the first day or between 60 and 90 days on the job sends a red flag that the workers are not getting the necessary training prior to starting the work,” Berry said in a news release.

Safety consultant Mac Weatherman of SafetyTech Consultants said there will probably be an increase in workplace inspections from from the NCDOL’s occupational health and safety division.

“Last year, the number of inspections was significantly lower than in previous years, which may have led to a sense of complacency among employers,” he said. “NCDOL may bring on additional personnel, or have more frequent inspections of ‘target industries’ such as construction and other high-risk sectors, to try and reverse this trend.  Compliance officers may be tasked to set a tone of increased application of citations and penalties to raise awareness of the seriousness of the issue.”

Weatherman said he anticipates that inspection emphasis will be placed on the leading causes workplace fatalities and injuries: Falls, struck-by incidents, electrical incidents, and caught-in/between incidents.

“Last year, struck-by incidents accounted for the majority of fatalities, surpassing falls as the normal leader of deaths,” he said.  “There will definitely be an emphasis on identifying and eliminating as many of these potential hazards as possible.

“All of us – safety professionals, employers, and employees – must do better in identifying struck-by hazards, which represented nearly half of the fatalities last year.  Staying vigilant around machinery and construction material is critical,” said Allen McNeely, director of the NCDOL OSH division.

Weatherman said there will be also an emphasis on training for employees. “This training not only includes basic orientation training, but task-specific training for employees engaged in hazardous operations or duties.  Compliance officers will be diligent in examining training records and will not overlook gaps or failures in required employee training,” he said. “Commissioner Berry has already made it clear that the Department of Labor feels that employers have not been adequately training their employees.”

The NCDOL news release says: “Whether the workers are new to the industry or returning after the lull in construction that began in 2007, the workers need training or refresher training before starting the job, training that we provide at no cost to the employer. Just call us at 1-800-NCLABOR.”

However, associations and consultants such as Weatherman’s business are also providing training and support services to overcome the safety challenges.

“Safety is the number one priority for Carolinas AGC,” said vice-president of professional development Bill Stricker. “Our goal is for employees to safely return home to their families at the end of each day.

Carolinas AGC said in a news release it is committed to removing obstacles to acquiring critical training by making training opportunities open to members and non-members for an affordable cost. In 2015, they will eliminate pricing obstacles by setting lower safety training pricing and make classes open to everyone.

“Carolinas AGC will ramp up promotional efforts for these courses to ensure employers and employees know they have these critical tools at their disposal. Our goal is to drive the number of deaths to zero,” said Stricker.

Alliance agreements with the North Carolina DOL and South Carolina LLR have been formed and Carolinas AGC will focus on changing negative outcomes by changing safety behaviors at this year’s safety conference. The Conference is scheduled July 30 – 31, 2015 in conjunction with the CAGC Divisions Conference and Industry Summit in Greenville, SC.

To further motivate employees to place utmost importance on proper safety, Carolinas AGC has created incentives for training and a safety culture through their annual safety awards programs and scholarship programs.

Meanwhile, both the Hispanic Contractors Association of the Carolinas (HCAC) and the Associated Builders and Contractors (ABC) Carolinas chapter have confirmed their own safety training initiatives.

HCAC says it held an OHSA 10-hour training program on Jan. 19 and 20, focusing on the recognition, avoidance, abatement, and prevention of safety and health hazards in workplaces. The program also provided information regarding workers’ rights, employer responsibilities, and how to file a complaint.

The association says additional safety trainings are available on demand as a part of HCAC’s objective to ensure the worker’s knowledge about their workplace hazards.

As well, the ABC Carolinas chapter has an annual safety conference, safety awards, and training programs on safety topics.