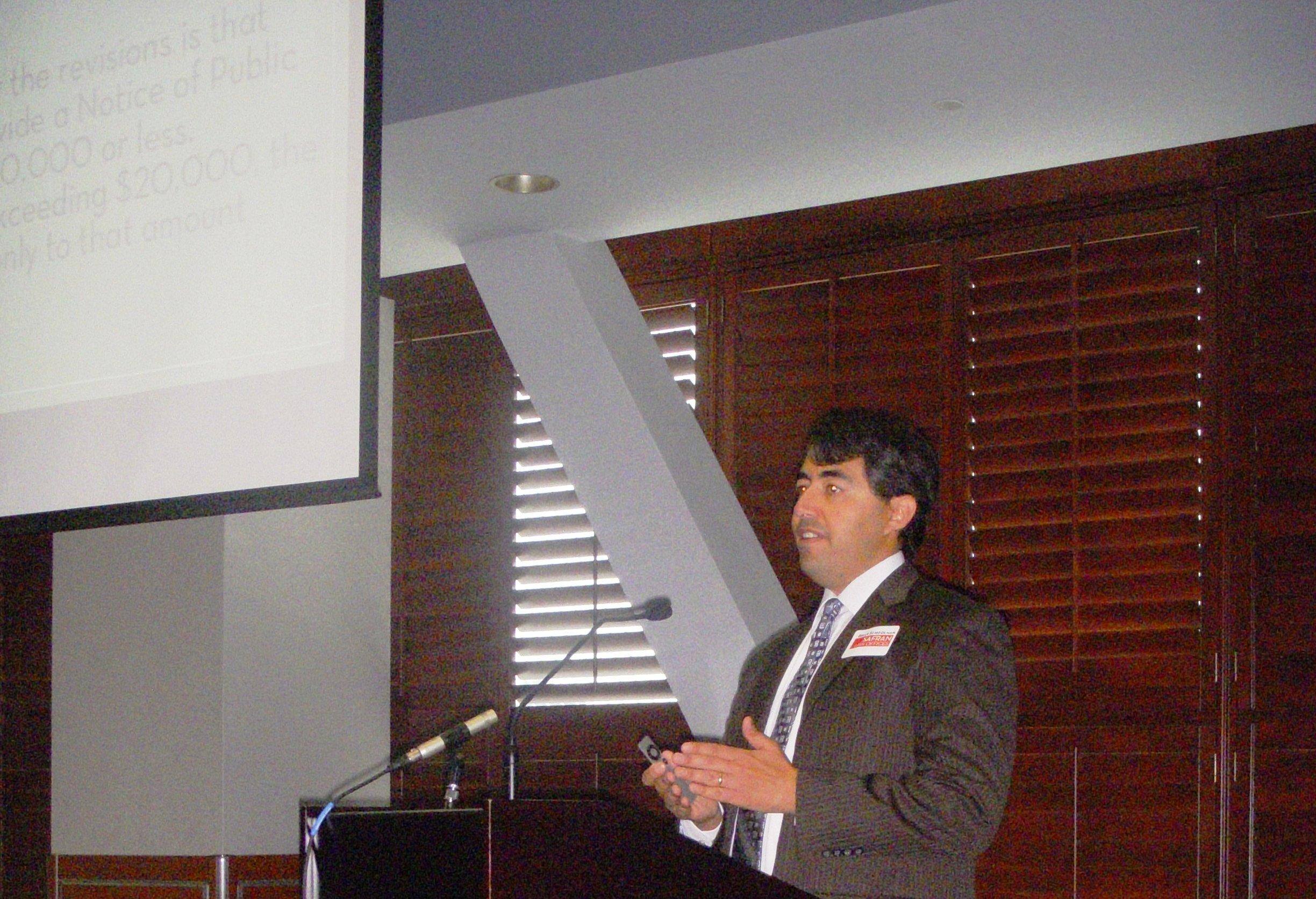 The 2012 Legislative Season has brought about the most significant revisions to North Carolina’s lien laws in years. The biggest change of all is that lien claimants who don’t deliver a notice to lien agent can have their rights cut off completely. A seminar on the NC Lien Law Revisions was held this week by the Safran Law Offices at the PNC Arena. The following is a summary of the lien law changes affecting contractors presented by Safran attorney Brian Schoolman. The complete text is posted on the Safran Law Offices website.

The lien law revisions considered by the General Assembly covered a number of issues, including at least three separate lines of litigated cases.  The Shearin / Harrelson / Mammoth line held initially that subcontractors could not deliver a notice of claim of lien upon funds after a bankruptcy petition, without violating the automatic stay. This meant that subs were effectively barred from exercising their lien rights if a higher-tier entity filed for bankruptcy.  The Wachovia case supported a loss of lien priority for a contractor based on the language in a partial lien waiver.  The Pete Wall decision found that liens on a leasehold interest could end up being valueless to the contractors who had provided services.

Other issues under consideration for years included a request to limit double payment by general contractors on public projects, and so-called “hidden liens” that caused liability for title insurers.

The 2012 General Assembly Study Committee – formally known as the Legislative Research Commission’s Committee on Mechanics Lien on Real Property –  held three open meetings, and engaged in other smaller sessions with various stakeholders, to reach a consensus on as many issues as possible. The Committee adopted findings in a formal report, which was reported on March 27, 2012. Those findings and recommendations included:

1) Addressing problems under the current law relating to federal bankruptcy court decisions, including the impairment of subcontractor claims of lien upon funds

2) Addressing the issue of double payment liability for prime contractors on public projects, as a result of claims under payment bonds by subcontractors and suppliers

3) Putting off the issue of “hidden liens” for further study after the 2012 short session, and

4) Recommending further study of the need for changes to current law to strengthen the lien rights of persons who contract with the owner of a leasehold interest to provide improvements to the leased property.

The aspects of the lien and bond law revisions adopted by the Committee were incorporated into the bill introduced as House Bill 1052. These were considered to be the “non-controversial” revisions, for which a large consensus had been obtained.

1) The definitions in Section 44A-7 were amended to clarify certain terms, and to move the notice of claim of lien upon funds definitions into a single unified section.

2) Section 44A-11 was amended to clarify that a claim of lien on real property is perfected when served upon the record owner, and filed under 44A-12.

3) Section 44A-12 was amended to require the claim of lien on real property to include certification of service of the named parties.

4) Section 44A-13 was amended to add provisions stating that in certain circumstances, former and/or subsequent purchasers of real property are not necessary parties to lien perfection actions, if no additional relief is sought from those parties.

5) Section 44A-18 was amended to state that a notice of claim of lien upon funds was immediately effective upon the first furnishing of labor, material or services. This change was made to address the Harrelson Utilities and Mammoth Grading decisions in the Bankruptcy Court, which invalidated subcontractor lien claims after the filing of a bankruptcy petition.

7) Another change to Section 44A-23 removes the requirement that a notice of claim of lien upon funds be attached to the subrogated claim of lien on real property, thus undoing a revision from the last round of lien law amendments.

The most significant change under HB 1052 was the amendment of Section 44A-27 to the payment bond statutes. A new “Notice of Public Subcontract” is now required to be served by all subcontractors and suppliers who are not in direct contracts with the general contractor, in order to preserve claims under that GC’s payment bond.

The revisions to 44A-27 also include mandating that a general contractor is obligated to deliver a copy of the payment bond within seven calendar days of a written request. If the contractor fails to timely furnish the payment bond, then the 75-day limit does not apply.

Revisions requested by the title insurance industry were not included in HB 1052, as the Study Commission deemed them too complicated, and without sufficient consensus, for legislation during the short session. However, on May 10, 2012, a group of title insurance companies announced to their approved attorneys inNorth Carolinathat they would cease writing title insurance policies in North  Carolina effective June 15, 2012.

While this notification was not stated as a threat, or an “or else,” industry groups representing lenders and homebuilders, and the General Assembly, viewed the title insurers’ notification as a demand for the “hidden lien” legislation to be fasttracked. Later in May, the first draft of a new title insurers’ proposal was circulated. This proposal was based in concept upon the lien agent model used inVirginiafor one- and two family residential construction projects. The threat of a pull-out by the title insurers led to a serious review of the legislative proposal. After several committee meetings, stakeholder meetings, e-mail exchanges, and lobbying efforts, a compromise was worked out, in the form of Senate Bill 42.

1) The creation of the “lien agent” designation. A lien agent must be registered with the Department of Insurance, and be willing to serve in the capacity described in the new sections 44A-11.1, 44A-11.2, and 58-26-41.  Only a representative of a title insurance company is presently able to register as a lien agent.

2) Any party providing labor, materials, or services for the improvement of real property (with certain limited exceptions for a direct contract with the owner, or for improvements of an existing single family residence) will now need to serve a “Notice to Lien Agent” in order to assure the preservation of lien rights against the real property.

3) The consequence of failing to serve the Notice to Lien Agent is that the party can lose lien rights if the property is sold or refinanced.  A potential lien claimant who has not served a Notice to Lien Agent prior to the sale of the property to a bona fide purchaser for value may not perfect a claim of lien upon that real property, unless the improvements provided by the party were first furnished no later than fifteen days prior to the sale.  Similarly, if a potential lien claimant has not served the Notice to Lien Agent prior to the recordation of a mortgage or deed of trust, a subsequently filed lien will be deemed subordinate in priority to the mortgage or deed of trust.

4) One exception to the lien agent requirements is that they do not apply for improvements to an existing single-family residence that is used by the owner as a residence.

5) Another exception is that a lien agent only needs to be identified if the cost of the undertaking at the time the original building permit is issued is under $30,000.

6) The identity and contact information for the lien agent is required to be identified by the owner.  It is supposed to be included in the application for a building permit to be provided to the inspection department, and to be posted at the jobsite.

There is a sanction for subcontractors who contract with a lower-tier sub or supplier who is not required to furnish labor at the site of the project. Those subs must give notice of the identity of the lien agent within three business days of the contracting, or else the sub may face liability for the actual damages of the lower-tier entity who was not provided with the lien agent information.

The effective date of the revisions included in SB 42 is April 1, 2013. The General Assembly adopted this date as a compromise between the requests of the title insurers (who wanted the changes to become effective as soon as possible) and other trade groups (who wanted enough time for making corrections, or to lobby the GA in the long session).

Notice by Contractors, Subcontractors and Suppliers

The easiest and safest way to protect lien rights is to deliver the notice to the lien agent as soon as the party contracts to provide labor, materials, and/or services. In fact, there is no obstacle to delivering the notice even before a contract is signed.

As discussed before, there are six different ways to deliver the notice, including by fax or by e-mail. The critical requirement is delivery confirmation. While the lien agent is supposed to respond within three days that he has received the notice, it is always best and safest to keep the confirmation receipt.

There were suggestions from legislators that future revisions should provide for different procedures between commercial and residential projects. In that event, there may be more dramatic changes to lien laws beyond just the lien agent notification.  Read More.