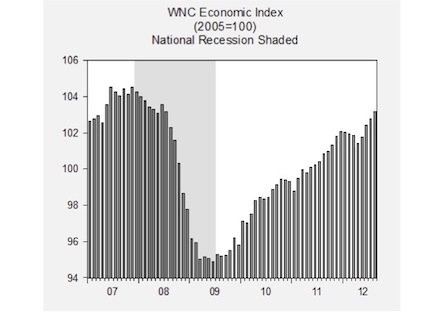 Falling unemployment, growth in new jobs and increased business activity has driven Western North Carolina Economic Index to its highest level since 2007 — before the Great Recession, according to Appalachian State University researchers.  The Citizen-Times reports the index increased by 0.4 points to 104.8 in October, the sixth consecutive month of growth in economic activity measured across 25 western counties.

“This is certainly promising,” said Dr. Todd Cherry, director of the Center for Economic Research and Policy Analysis at Appalachian. “During the last six months we have seen consistently strong gains in regional economic activity.”  A mending economy should mean more jobs opening up, Cherry said.

“This appears to be playing out now with the region adding about 15,000 jobs in the past two months. People will start to feel better when they see more jobs,” he said.  But six months of growth doesn’t mean the index will continue to rise for the remainder of the year as data becomes available.

Many businesses seem to be pulling back with hiring, production and orders, waiting to see how Washington lawmakers resolve the “fiscal cliff,” according to Scott Hamilton, president and CEO of AdvantageWest, the economic development agency that cosponsored the monthly index.  Washington must come to an agreement on what to do over expiring tax cuts and scheduled cuts to domestic and military spending.

“I think that’s weighing on people. They want to know what’s going to happen. Once there’s some certainty, businesses will know how to move forward,” Hamilton said.  The growth has been slow but steady so far. Hamilton pointed to an increase in regional manufacturing with 50,000 workers working in factories and production lines in June, compared to 49,085 in January.

Those numbers should continue to improve into 2013 with this week’s opening of the Oskar Blues Brewery in Brevard. Also, Sierra Nevada will start brewing beer next summer at its Fletcher location, Hamilton said. The Canadian auto parts maker Linamar continues to hire at its new South Asheville plant, and other manufacturers have to meet pent-up demand.

“I think this recovery is going to be somewhat like a stairstep, going up and then leveling off, rather than a swoosh up like previous recoveries,” Hamilton said.

The index released last week showed all counties across the region saw increased employment. “While improvements in the job market have occurred across the region, some areas have gained more than others,” Cherry said. The largest employment gains occurred in McDowell, Yancey and Graham counties with 6.8, 3.7 and 2.4 percent increases, respectively.