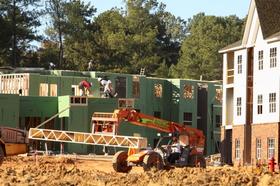 A significant improvement in the residential category pushed North Carolina’s February total for new construction contracts to a 24% monthly gain, compared to the same period of a year ago, reports Southeast Construction.   McGraw-Hill Construction estimated the value of all February contracts at nearly $1.2 billion.

Housing contracts tallied $646.2 million in February, a 69% jump compared to last year. The nonbuilding category, which includes infrastructure projects, eked out a 3% increase for the month with about $218.2 million in new contracts. The nonresidential market fell 14%, however, with its total of $291.2 million.

Despite the February increase, North Carolina’s year-to-date contracts total is still down compared to early 2011. To date, McGraw-Hill estimates the state’s contracts total at about $1.9 billion, or 2% lower than a year ago.

By category, residential is the only positive sector, according to the company. The housing sector has registered roughly $1.1 billion in new contracts so far in 2012, or 42% better than the first two months of 2011. Nonresidential is 41% behind last year’s early pace, however, with roughly $474.3 million in new projects to date. The nonbuilding category, estimated at $338.7 million, is 10% behind the same period of a year ago.  Read More.