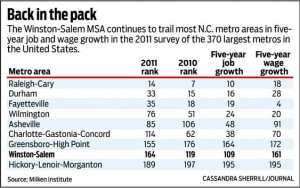 Overall, of the state’s nine large metro areas, only two improved their  rankings in the past year — Asheville from 106th to 85th, and  Hickory-Lenoir-Morganton from 197th to 189th, reports the Winston-Salem Journal.

Raleigh-Cary was the highest ranked North Carolina metro at 14th, down from  seventh according to the Milken Institute’s 2011 ranking of the 370 best-performing metro areas.

The Charlotte-Gastonia-Concord MSA fell to 114th from 62nd in 2010.  Michael Walden, an economics professor at N.C. State University, said he is  not surprised by the overall drop of state metro areas in the Milken  rankings.

“North Carolina has lagged the nation in job growth, so any measure — like  the Milken Institute — that focuses on jobs or job-related factors, such as  salaries, will put the state at a disadvantage,” Walden said.

“However, other measures show North Carolina … did better than the nation on  growth in GDP from 2009 to 2010. It also saw worker productivity in the state  increase twice as fast as in the nation between 2009 and 2010.

“The state’s current improvements in worker productivity are a big plus for  recruiting businesses,” Walden said.

he report has become a prominent measuring stick of the Triad economy in the  past eight years. When the rankings began, Winston-Salem, Greensboro and High  Point were combined for federal data purposes.  After being ranked 165th in 2003 because of major manufacturing job losses,  the Triad’s three major chambers of commerce pledged to get the region into the  top 50 by 2010 by cooperating more on economic-development projects and  improving local workforce skills.