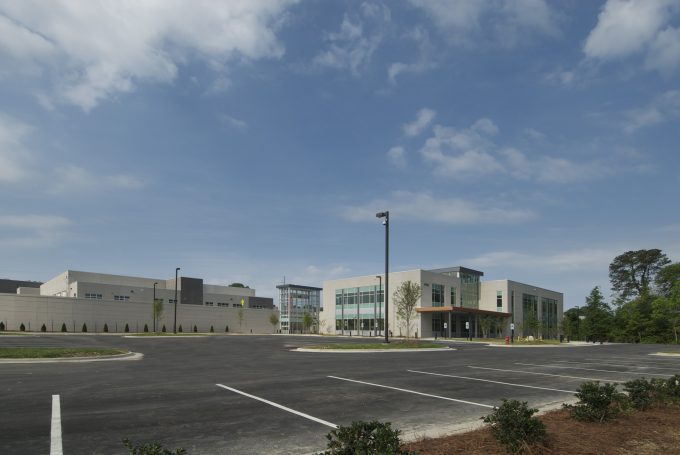 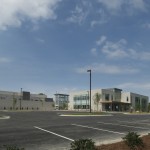 When the project is groundbreaking green construction, you don’t often think of a bus garage/operations center. But the City of Raleigh Transit Operations Center, which officially opened in late May, is all that — one of the first integrated transit operations projects in the country to seek Leadership in Energy and Environmental Design platinum status from the U.S. Green Building Council. LEED Platinum is the highest level of certification. The Transit Operations Center is housed in a 90,000-square-foot facility built on 23 acres on Poole Road just outside the Interstate 440 beltline. It was built to accommodate 125 buses—the City currently has 96 —and can expand to handle 200. The nearly $29 million project, paid for in part by $11.6 million in federal stimulus funds, incorporates a number of sustainable building concepts, including bamboo flooring and cabinets, cisterns to catch and recycle rain to water the grounds, sensors to make the most of natural lighting and wool-blend carpets.

But what really sets it apart from other projects, according to the designers, contractors and subcontractors, is its unique heating and cooling system, using 150 geothermal wells with chilled beams and radiant flooring.

The other unusual thing about the project was the speed in which it was completed. Raleigh general contractor Brasfield & Gorrie won the bid for it in July 2009 and pushed it through to completion earlier this year. The fact that it received stimulus dollars provided much of the impetus for the quick work, says project manager David Finch.

That’s because stimulus dollars could only be used for projects deemed shovel-ready. To move the operations center for that status meant the city had to petition the state to allow it to designate it as a “design-build” project, which meant that drawings would be only 65% complete before bids were sought. “It was the first time this happened, at least for the city of Raleigh,” Finch says.

One of the most daunting tasks was getting the property, which had been purchased only three months earlier, rezoned for the center. “We were seeking a very generous zoning category because we didn’t have a final plan together and needed flexibility,” Johnson says. “That can make people uncomfortable because it allows all kinds of uses.” In the end, the team worked with community liaison groups, explaining that the center would employ 200 and be an economic engine for that part of Raleigh.”

Ola Ferm, one of the owners of Williard Ferm, agreed that the timing was a challenge. “We had three months to do a $24 million job. We’d normally have a year to do that.” Once the design-build was completed, the city also hired Williard Ferm for a conventional construction-administration role. “We reviewed the last 35% of the design to make sure it conformed to the original bridging documents,” he says.

The showpieces of the Transit Operations Center are its geothermal well system and its chilled-beam heating, ventilation and air conditioning system. Scott Triplett, president of Memphis, Tenn.-based Midsouth Geothermal, explained that the center’s parking lots cover 150 300-foot-deep geothermal wells, which use water circulated through 1” polyethylene piping to heat and cool the operations building. “In lieu of using air to air conventional heating and cooling systems, it exchanges heat back and forth to the earth,” Triplett explains. “You’re taking heat out of the building in the summer and putting it in the ground. In winter, you’re taking from the ground and putting it in the building.”

Triplett, who has been installing geothermal wells for more than 14 years, says he encountered a challenge at the Raleigh site. “The geology made it difficult to drill,” he says, noting that the loose wet sand for the first 60 feet tended to collapse, forcing the company to install steel casings to bolster the wells. Meanwhile the bottom 240 feet was granite. “We brought in some different technology and ended up getting a system down that worked smoothly,” he says.

Working with the geothermal wells are the chilled beams, which Finch describes a sort of radiator made of coils in the ceiling. Chilled or heated water is pumped through chilled beams which in turn cools or heats the surrounding air in the room.

Ginger Scoggins, principal of Raleigh-based Engineered Designs, which designed the system, says her company has designed a lot of geothermal well systems but that this was the first time it incorporated the chilled beams. “This is the top of the line in energy efficiency,” she says. Together, the systems save about 70% on heating and cooling costs, with about a six-year payback on the investment.

Brown Brothers Plumbing and Heating Co. in Durham also helped in the LEED effort, installing cisterns to capture rainwater for irrigation, waterless urinals, low-consumption toilets and other conservation-minded products. Rodney Whitaker, treasure and partner at Brown Brothers, called the project a fulfilling one on many levels. “It was rewarding just coming together as a team trying to get something near impossible to build built in the correct timeframe,” he says. “You learn what you can handle as a company and part of the team.”

Ferm says it all came together because designers, contractors and subcontractors worked together, which he says is the goal. “You have to make sure you don’t lose track of what you’re trying to accomplish on a project,” he says. “In this case, it’s a 50-plus year facility that’s going to serve the transportation needs for the city of Raleigh. That guided all the decisions, including how mate
al selections were made. This is not a shopping center that’s going to last 15 years.”
The City of Raleigh anticipates receiving LEED certification by the end of the year, Finch says, and he notes that it will be a huge accomplishment. “There is literally 18 to 20 acres of paving at the project and we’re still able to reach LEED status. It just shows that when the design team and owner are willing to put in the work, it’s possible to meet the highest standards in sustainable construction.”