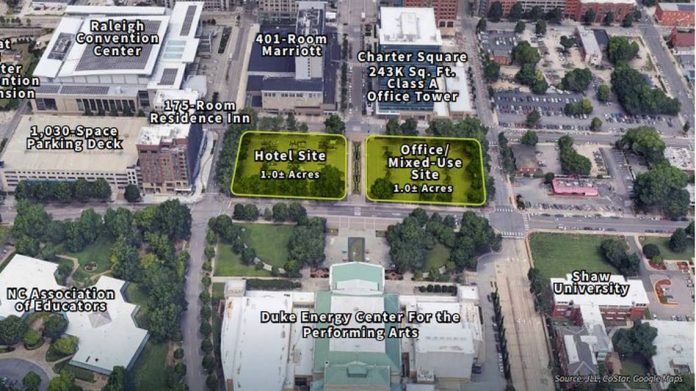 Raleigh City Council has approved a plan to turn two downtown parking lots into a hotel with more than 500 rooms and an adjacent office and residential tower.

Calling it a “once-in-a-lifetime” opportunity to turn prime downtown space into hotel, office and residential space, the city manager’s office recommended the city start looking for developers to build the hotel.

It’s a 2.5-acre city-owned site on Fayetteville and West Lenoir streets, across from the Raleigh Convention Center and the Duke Energy Center for the Performing Arts.

limited hotel rooms and room blocks around the RCC impacts the size and number of conferences and events that the RCC can host. Two studies over the past several years, including the Raleigh Convention and Visitors Bureau Destination Strategic Plan, indicated that an additional 400-500+ hotel rooms are needed to support the existing venue and for future RCC expansion.

Additionally, funds were approved last year as part of the Interlocal Funding process (Hospitality Tax) to optimize the RCC by reconfiguring space that would allow room for additional meetings and attendees.

In 2017, as part of a study on City-owned property, City Council approved using the surface parking lots in front of the Duke Energy Center for the Performing Arts (known as sites 2 and 3) as future hotel/office/mixed-use. Council also approved mapping Fayetteville Street requiring street right-of-way through the parking lots to extend Fayetteville Street as part of development.

The City contracted with Jones Lang LaSalle IP, Inc. (JLL) to complete a Request for Interest (RFI) as the first step in the process to seek a partner to develop the sites with a convention center hotel and office/mixed-use project. Each site is just over one acre taking into account the mapped right-of-way.

The RFI is attached and if approved by Council is to be released to the public on January 27, 2020, via website and press release. The goal of the RFI is to seek interested developers for the hotel/office/mixed-use sites.

Following submission of proposals from development teams, JLL and staff will review the proposals and recommend to Council the next steps which are expected to include a more specific Request for Proposals (RFP) process from the selected developer finalist. The submission and review process is expected to take until late Spring/early Summer 2020 to complete.

Finally, it is noted that as part of the Interlocal Funding process in 2019 that both the City Council and County Commission approved funding for infrastructure/parking for the convention center hotel project to leverage about $30 million in debt for a public-private partnership.

The report notes the City Council and Wake County Board of Commissioners approved $30 million in hospitality tax money for the convention center last year to help develop the hotel.

JLL will identify and screen developers for the high-profile project, which will also include input from community members and designated stakeholders.

The site is zoned for building up to 40 stories, according to the project’s presentation to the council.