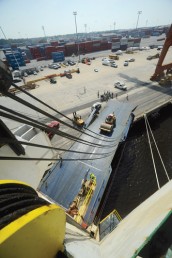 Several projects are being discussed at the Port of Wilmington that would continue to increase activity at the facility, reports the Greater Wilmington Business Journal.  Long called a key component in the region’s economic development efforts, activity at the Port of Wilmington appears to be on the upswing. With growing container traffic and pending proposals for new export facilities, state and local officials continue to make Wilmington’s port competitive with its surrounding port city counterparts.

Fiscal year 2012 proved to be a good year for the Port of Wilmington.  More than 460 ships passed through the port, unloading and exporting more than 4.3 million tons in goods, chemicals and forest products.  The total represents an uptick in traffic from several years ago. For example, in fiscal year 2003, 320 ships docked at the port to unload or load more than 2.2 million tons worth of product from container, bulk and breakbulk cargo.  China continues to be the top importer and exporter at the Wilmington port, according to fiscal year 2012 statistics. In all, China’s total trade represented more than 949,000 gross tons of various goods. Great Britain was second with more than 463,000 gross tons.

At the start of the new calendar year, the N.C. Ports Authority began taking to steps to position the Port of Wilmington as a major tool in the state’s efforts to foster economic development and bolster cargo traffic.  Officials have issued a request for proposals to design and build a major dry bulk export facility.  The multi-million dollar facility would receive, store and transfer wood pellets to ships for transport to Europe, according to a recent request for bids by the port authority. The initial phase involves the construction of new rail, unloaders, conveyors, storage domes, a shiploader and related infrastructure, according to the document. Two reinforced concrete domes, 191 feet in diameter, will store 37,500 tons each.

During the project’s second phase, two additional 175-foot-diameter domes would be added, each with a 37,500-ton capacity. The third phase would also add two domes with 37,500 tons of capacity each. Bids are due back to the authority by Jan. 31, with work slated to begin sometime in 2015, contingent upon available funding.

The state’s inland port terminals – located in Charlotte and Greensboro – might also play a bigger role in Wilmington’s port traffic, thanks to thousands of new manufacturing jobs announced last year.  Many of the goods produced in the Piedmont and exported from North Carolina’s shores will travel through Wilmington’s port to their final destinations – yielding larger tonnage numbers and increased cargo traffic.

The state’s Logistic Task Force, formed in 2009 by former Gov. Beverly Perdue to review roads and highways, airports, ports, multimodal transportation and railroads, is also bullish on Wilmington’s port.  Dale Carroll, deputy commerce secretary and chief operating officer for the N.C. Department of Commerce, said the task force was in the process of activating the Pembroke Turn – an inactive rail spur in Robeson County that could connect with CSX rail line that runs into the port. espite being located more than 90 miles north of the Port City, Carroll said the development could have a major impact on the port’s tonnage and growth.

“Restoring the Pembroke Turn in Robeson will restore linkage of Fort Bragg to the Port  of Wilmington … so Fort Bragg will use the Port of Wilmington to send equipment to the world,” Carroll said. “It’s something we’re very pleased that’s being activated.”

Meanwhile, New Hanover County officials are also hoping to entice development in three, proposed Port Enhancement Zones that could help increase cargo traffic at the Wilmington port.  County commissioners approved a resolution in January to move forward with the zone designations. Officials with Wilmington Business Development will submit the sites to the N.C. Department of Commerce.  Totaling more than 5,000 acres, the Port Enhancement Zones would be areas located within 25 miles of the state port and fall within economically distressed areas of the county. Under the designation, economic development officials could provide up to $2 million in state tax credits for new jobs created within the zone, according to county staff reports.

Wilmington Business Development consultant Rick Benton said once the zones were approved, they could be renewed every two years.  “We can add to the list as long as it meets the state’s criteria,” Benton said. “We feel the zones are going to make New Hanover County more competitive with other parts of the state.”  Read More.