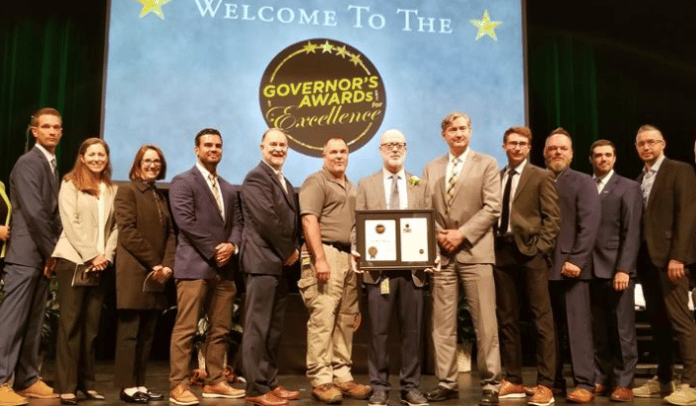 Thomas Walls, who is the N.C. Department of Transportation’s Unmanned Aircraft Systems (UAS) Program training specialist, was awarded the Outstanding Government Service Award during the Governor’s Awards for Excellence​.

“I am really humbled,” Walls said on Oct. 25. “It’s a great honor, but I wouldn’t be here if it wasn’t for our family at the Division of Aviation. It’s a great group of people to work with. It’s an honor to represent the UAS community for NCDOT.”

The Governor’s Award for Excellence is the highest honor a state employee can receive for noteworthy service to the government and the people of North Carolina. Walls is the only NCDOT employee to receive the honor this year.

He said it was in 2014, while he was employed with the NCDOT Photogrammetry Unit, that he was first introduced to the possibilities of drone technology. At that time, he was tasked with working with N.C. State University and the Institute for Transportation Research and Education to do a study about drones. After purchasing a drone from Germany, he began working with the organizations to test the accuracy and capabilities of the drone.

Since his initial work on that project, Walls has helped North Carolina break new ground with the BEYOND Program, training NCDOT and other state agency personnel to use drones to support operations so they can be done more efficiently, safely and at lower costs. His work includes helping NCDOT make national news as the first in the nation to conduct a bridge inspection using a drone that flew beyond the visual line of sight of the operator, flown under a first-ever waiver granted by the Federal Aviation Administration, and the first in the nation to deploy tethered drones on Incident Management Assistance Patrol (IMAP) trucks.

Division of Aviation Director Bobby Walston said the team is happy that Walls’ career accomplishments are being recognized in this way and he has been instrumental in “integrating drones into the Department of Transportation in all kinds of innovative ways.”

“[Tom] is the guy who shows up, every day, all day, no questions asked, making sure everything is done,” Beaman said. “We are super excited that he is winning this award and it means so much to us that they are taking the time to honor him for all of his work and service.”

Walls has also supported medical and supply delivery operations by serving as a subject matter expert and advisor for several North Carolina companies. This includes advising on drone routes and local conditions, setting up equipment and observing tests. BEYOND company partners also send their equipment to him to test and provide feedback.