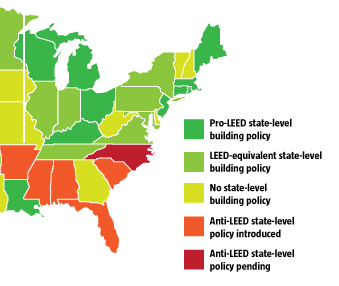 The Tar Heel State took one step closer to becoming the first state to buck the nation’s most visible building performance ratings system, reported ARCHITECT magazine.  By a broad margin, the North Carolina House of Representatives passed a bill in May that will bar the use of LEED for rating public projects. The Protect/Promote N.C. Lumber bill will do exactly that, if passed by North Carolina’s republican-controlled Senate and signed by the state’s republican governor. The timber industry has argued—successfully, so far—that the U.S. Green Building Council’s ubiquitous green rating system disadvantages locally sourced wood.

The LEED system has its own allies in this fight. The Charlotte-based steel company Nucor Corp., for example, benefits from the state’s current policy, which permits cities and counties to offer reduced fees and rebates for LEED-certified construction projects. Nucor continues to lobby state legislators on LEED’s behalf.

The debate is spreading. The state of Florida, for example, requires that all new state office buildings adhere to a national green building code, without mentioning LEED specifically—much as in Pennsylvania, Nevada, and other states. But a proposed Florida bill would circumvent LEED. It has the backing of the state’s timber industry, which has argued that just 200 of Florida’s 16 million acres of forest are LEED certified.

Using Scout, a tool published by the Sunlight Foundation for searching congressional and state-level legislation, along with information from the U.S. Green Building Council and reports, ARCHITECT has published a map showing roughly where all 50 states stand vis-à-vis LEED as a building performance ratings system.

The map shows state policies, but in fact building-performance policies are often more granular. Were Texas to adopt a state-level anti-LEED policy, it would trump local pro–green building policies set by eight cities and one county. Arguably, city and county policies can do as much to promote sustainability as state-level policies. As sustainability advocates may discover, the best green legislation may be no state legislation at all.  Read More.