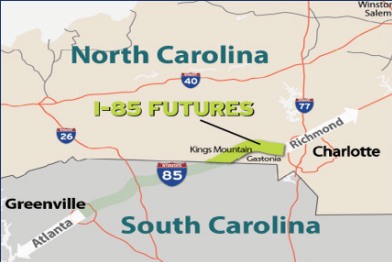 North Carolina will receive $100 million in federal grant funding for improvements along Interstate 85 between Charlotte and the South Carolina line.

The Infrastructure Rebuilding America awardis one of 26 grants nationwide announced on by the federal government – a total of $1.5 billion. It will assist the state DOT to widen 10 miles of I-85 in Gaston County from six to eight lanes, which will include improvements at interchanges, overpasses and railroad bridges.

Grants will pay for widening about 10 miles of I-85 in Gaston County from six to eight lanes allowing for installation of broadband infrastructure and electric vehicle charging stations along the route in both Gaston and Cleveland counties.

The announcement comes a month after the U.S. Department of Transportation $60 million in federal Rebuilding American Infrastructure with Sustainability and Equity grants to fund six major transportation projects across North Carolina including reconstructing 28 bridges in the mountains, and planning for a passenger rail service through North Carolina.