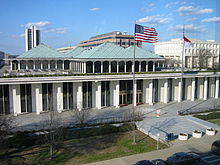 Every Thanksgiving, people line up for hours outside of stores waiting for Black Friday sales.  When the doors open, the once peaceful tent city descends into an every-man-for-himself tug-of-war. Welcome to the world of the General Assembly.

Three years ago, the Construction Law Section of the North Carolina Bar Association decided to take on the “hidden lien” issue. The effort proceeded in stages. First, there was an effort to build consensus among “stakeholders” (a  term referring in this case to GCs, owners, subs, title insurers, and other segments of the construction industry). Then, earlier this year, the “hidden lien” provisions were shelved so that non-controversial but necessary revisions could be enacted.

Enter Title Insurance Lobby, stage left. Title insurers, unwilling to wait around for another year, introduced the “lien agent” bill to keep track of subs and suppliers. So now we had two bills to track.

The stampede was on, and blogging about details became pointless because the details changed on an hourly basis. To appreciate how quickly things were changing in the last ten days, just look at the history of S42, paying particular attention to the events beginning on June 20. Same story for H1052, formerly known as H864.

I’m hearing doom and gloom from some subs and suppliers, who object to yet another procedural obstacle being placed between them and their constitutionally prescribed lien rights. I would caution against snap judgments. Contractors in other states have been living with pre-notice statutes for years, and have survived. And keep in mind that the easiest time to collect past due bills is right before a closing.

The lien agent provisions take effect next April, so there is some time to adopt new procedures to protect your company. I prepared the following document as a “look forward” to what certain portions of Chapter 44A might look like on April 1, 2013. Existing statutory language deleted by S42 or H1052 will not appear in this document. Additions from H1052 are shown in RED TEXT . Additions from S42 are shown in BLUE TEXT.