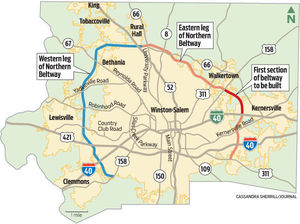 The House Transportation Committee has approved a bill  that would keep the Department of Transportation from creating new corridor maps and eliminating the current maps – essentially ending any new major highway construction plans on the books, if the land has not been purchased yet, and stalling the process for future plans for at least a year. WRAL reports.

The bill comes after the North Carolina Supreme Court said the state owes money to property owners whose land and property rights were affected by current Map Act restrictions.

Legislators are making four major changes with House Bill 959 to begin the mitigation process. The first keeps the DOT from creating any new maps for future highway plans until July 2017 and eliminates all current maps.

“In this one-year period, the bill requires the DOT to study the Map Act process and come up with proposals to fix the issues the Supreme Court found,” the report says.

“This is only the first step. We have a lot of landowners out there who potentially could pursue claims against the state for what was the law until it was recently declared unconstitutional,” Rep. Chuck McGrady, R-Henderson, said.

The Map Act allows for the DOT and local governing bodies to create corridor maps, and after the map has been filed, no new building permits or subdivisions would be approved for land in the corridor. This keeps those property owners from building or adding on to their properties and often takes away their ability to sell their properties because it can not be developed.

The Map Act does allow for property owners in the map area to request an exception, and compensation is, in theory, also required.

The state Supreme Court’s decision and House Bill 959 attempt to clarify what that compensation looks like and where the compensation comes from.

The new bill puts those costs on the state’s Strategic Transportation Investments program, under the particular tier – statewide, regional or divisional – that created the corridor map and planned to fund the highway or transportation project.

House Bill 959 passed the House Transportation Committee and will go back to the Senate for further approval.