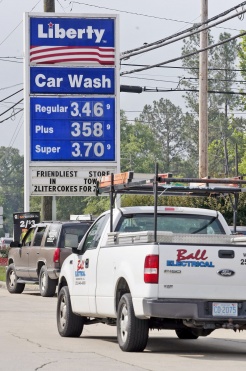 In an unusual agreement  between the two often feuding sides, Democratic Gov. Bev Perdue and Republican  legislators agreed to cap the gas tax at 37.5 cents. The Carolinas AGC released a statement: “While we would  prefer no reduction or cap, the agreement is that the gas tax would be capped  for one year at the rate of 37.5 cents with the understanding that the NC  General Assembly will look at the entire transportation funding package next  year as part of the review of the entire tax structure.”

WTVD-TV News reports analysts say capping the tax – as a bill that is moving forward in the General Assembly would do – would cost the state about $80 million that goes to transportation for roads, rail, and fixing potholes.

The tax rate is expected to fall July 1 from  38.9 cents to about 37.7 cents, because part of the tax is tied to wholesale  fuel prices and fluctuates as they do. While the tax nonetheless continues to  fall, Perdue and the House Republicans say they want to prevent it from rising.  Perdue says that the cap of 37.5 cents would save motorists $63 million in gas  taxes, a tiny piece of the $1.88 billion the state expects to take in. Last  fall, the House and Senate could not agree on whether to cap the gas tax, but  Senate leader Phil Berger said he wants to freeze the tax during the current  short session.

The NC Budget and Tax Center – a non-partisan project of the North Carolina Justice Center – issued a report that argues against a cap. Click here to read the report.  The report says North Carolina collects about $50 million for every penny of the tax, yet the state’s transportation budget already faces a funding gap. It also says even with the tax, North Carolina’s gas prices are on par with most other states.

NC Go!, a transportation advocacy coalition of which  CAGC is a founding member, issued comments on the proposed cap:  In her proposed 2012-2013 budget, Governor Bev Perdue has included a  provision to cap the state’s motor fuels tax at 37.5 cents, in order  to provide relief to North Carolinians struggling with high gas prices at the  pump. While NC Go!  supports relief for drivers, capping the tax must be a  temporary measure and the cap must be allowed to “sunset” or expire after July  1, 2013. Failure to do so will do far more harm than good to North Carolina’s  transportation system, and ultimately to citizens, businesses and our state’s  economic climate. As  the legislature weighs budget decisions, NC  Go! urges them to consider the effects of any long-term cap to the motor  fuels tax.  Read More.