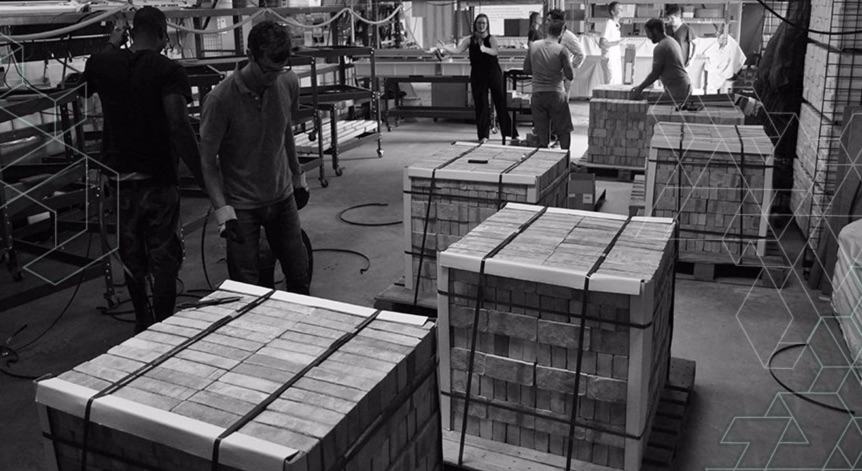 The North Carolina Biotechnology Center has awarded a $500,000 Strategic Growth Loan to bioMASON of Research Triangle Park to support the commercialization of technology that reduces energy use in the building and construction industry “by growing better, cleaner, and cost-effective biologically based cement for pre-cast and masonry building materials,” WRAL TechWire reports.

The funding is one of 21 grants and loans totalling $2.5 million to companies, universities and nonprofit organizations across the state during the third quarter of its 2015-2016 fiscal year ending March 31 to support research infrastructure, product development and commercialization, and business and technology events.

The award is one of several received by the bioMASON start-up business that seeks to revolutionize the masonry industry.

“Founded in 2012 by Ginger Krieg Dosier and her husband, Michael, the building-materials company grows bricks and masonry from scratch without the need for any heat,” an article in Ecopreneurist reported. “While traditional brick making requires heating clay in kilns at 2,000 degrees for several days — which releases massive amounts of carbon emissions into the atmosphere — BioMason injects sand with microorganisms to initiate a process like the one that creates coral. The technique takes four days. Once completed, the bricks are strong enough for use in houses, commercial buildings, and other structures.”

“I knocked on a lot of doors of scientists and microbiologists,” Dosier said, describing  her time spent researching BioMason’s brick-making method, “and they were kind enough to not tell me I was crazy.”

Investors agreed. BioMason raised $2.8 million in seed funding, grants, and awards, most of it during 2013. The money included more than $500,000 from the Postcode Lottery Green Challenge, which featured a jury chaired by Richard Branson, the article said.

She thought coral might hold the answer to develop a green building solution. “I looked at how coral was able to make these incredible structural formations that could withstand water and erosion and began really researching how it was able to grow.” She asked scientists at Research Triangle Park in North Carolina if the process could be used to make bricks. It could be done, they said. It’s just that no one had ever tried it before.

“This required a rare combination of talents and areas of intelligence,” says Patrick Rand, professor of architecture at N.C. State, who advised Dosier on the project, the Ecopreneurist story reported. “She sparked the whole process by imagining that biochemistry could do in days what geological processes have taken millennia to accomplish.” Dosier then assembled a team of employees including biologists, architects, engineers, and fermentation experts.

Every bricks starts with sand packed into rectangular molds. The molds are then inoculated with bacteria, which wrap themselves around the grains of sand. With each bacteria-covered grain of sand acting as a nucleus, calcium carbonate crystals begin to form around it. An irrigation system feeds the bricks nutrient rich water over the course of several days to facilitate the process. The crystals grow larger and larger, filling in the gaps between the grains of sand. After three to five days, the bricks are ready for use. .  . .

Finding customers is a daunting task. “The design and construction industry is a big dinosaur,” says Ihab Elzeyadi, a professor at the University of Oregon’s Ph.D. in architecture program. “It moves very slowly. It doesn’t embrace change very easily.” There are also building codes to be met and building inspectors to convince. While there are industry standards for traditional bricks and masonry, no such measures yet exist for biological products.

But Dosier says once potential customers see the results of durability testing performed by third-party labs, they’re convinced. The bricks have proved to be as durable as sandstone. They also can be made in many shapes and sizes. BioMason has licensing agreements with two US-based manufacturers of construction materials and is in talks with several more, including two European companies. Her bio-bricks are expected to be competitive with standard bricks by the time they hit the market in 2017.

Dosier is committed to finding ways to reduce greenhouse gas emissions. “I really wanted to pursue a different approach to how materials were made,” she says. “It just didn’t seem right for us to essentially extract material from the ground and then fire it with quite a large amount of fossil fuel just to make a hard product.” She says, “Our goal is to impact. It’s a global goal,” says Dosier. “We wanted to do what had never been done before, to push the boundaries. And instead of being ‘less bad,’ we wanted to completely redo it–the hard way.” Elon Musk couldn’t have said it any better.

An article in Inhabitat reports that the company hopes to begin commercial production next year.

In 2013, the company won a $560,000 prize in the Postcode Lottery Green Challenge. Since that time, the company has been perfecting its zero emission, zero waste production techniques and working on scalability. The company runs a pilot plant in Durham, NC which is capable of producing 1,500 bricks per week, but they’ll need to make a lot more if they really want to shake up the industry – and they do.