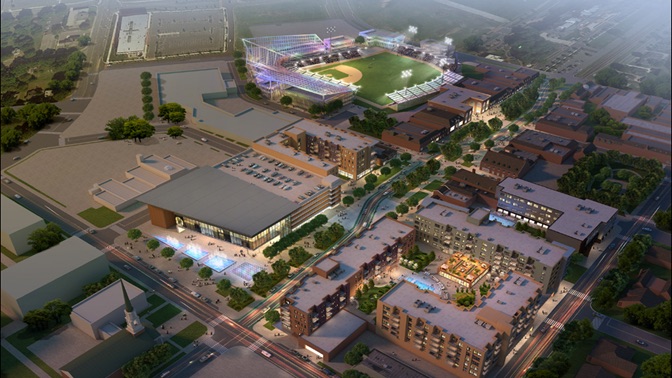 Kannapolis City Council has selected Lansing Melbourne Group (LMG) for the development of a mixed use district known as the Demonstration Project. LMG proposes investing more than $60 million in the project.

City council met with members of LMG in early August and voted to establish a memorandum of understanding (MOU) with the firm for the development of the project. Staff will now negotiate with the company on a Master Development Agreement, which will establish more details regarding the design, finance, construction, ownership and operations of the Demonstration Project. It is expected that the Master Development Agreement will be completed by this December, the municipal announcement said.

The demonstration project is one of the first steps in revitalizing Kannapolis’s downtown and will include multi-story residential, retail and parking development between Main Street and West Avenue.

“This project is expected to generate momentum and enthusiasm in downtown Kannapolis,” the city’s announcement said. “The city will make an investment in the parking structure while the developer will invest in purchasing the land from the City and constructing the other buildings.”

LMG is based in Fort Lauderdale and has completed projects across the United States including Hyatt hotels, Verizon and Hewitt Packard facilities. LMG’s management team Peter Flotz and Kent Gregory introduced themselves to City Council and elaborated on why they want to invest in Kannapolis.

“This is a once in a lifetime project,” Flotz said. “We like working with government and we believe we can make a difference and create a special place with this project in Kannapolis.”

LMG’s management team also includes Bob Bistry who will be the the project’s architect. LMG plans to use local firms for construction while using their management team to lead the process. Construction is anticipated to begin in the summer of 2017 with the entire project taking five years to complete.

In July Andrew Trump with Development Finance Initiative said LMG is proposing the development of a downtown hotel that would incorporate the buildings currently in the block that includes the Cabarrus Bank Building, BonWorth and L’eggs Hanes Bali Outlet Store among others, Charlotte Business Journal has reported.

“The existing historic buildings would be integrated into the hotel development,” Trump said. “What they believe to be the best uses of that is conference space, meeting space, activity space that would preserve those historic buildings.”The Demonstration Project is one of the first steps in revitalizing downtown and will include multi-story residential, retail and parking development between Main St. and West Ave.. This project is expected to generate momentum and enthusiasm in downtown Kannapolis, leaders say.

“The development community likes certainty and a clear pathway, by us controlling the land and being able to preassemble the land for them, to have done some environmental assessments and other things, there’s been a lot of work done already for this developer,” Legg added.

The project is a part of a planned $250 million remake of downtown Kannapolis as it works to support the N.C. Research Campus and bring residents and activities to the immediate area.