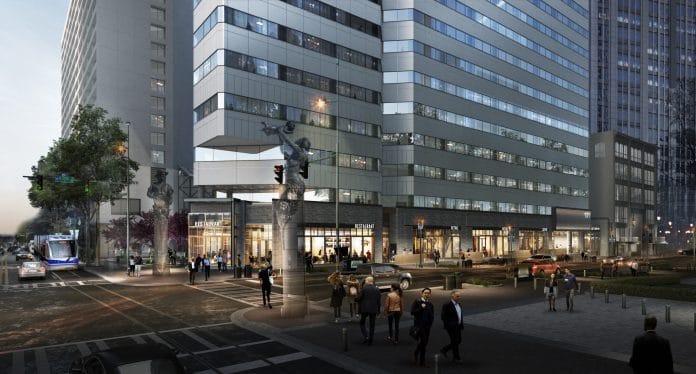 Crescent Communities and Nuveen Real Estate say they will invest approximately $25 million for capital improvements as they rename the commercial renovation development at the corner of Trade and Tryon Street in Charlotte.

BBVA and USbank are providing construction financing for the renovations, and JE Dunn will serve as the general contractor.

In collaboration with architecture and design firm Gensler, they say the new design creates a unique hospitality experience activated by street-level engagement.

“Multiple outdoor seating options are linked together with features including a prominent front porch and a new entrance along Tryon Street; a light and airy atrium filled with a living green wall, natural tones, and beautiful hanging light installations; a renovated office lobby; and an expanded street with enhanced retail and restaurant offerings. The dynamic internal marketplace is then connected to the active sidewalk promenade via a unique ‘street extension’.”

“Today’s employees expect their workplaces to offer more amenities and common areas, and with One Independence Center, we will create the premier business, dining and leisure destination – something we’ve felt is missing in the urban fabric of Uptown,” said Brendan Pierce, senior managing director of commercial development at Crescent Communities. “The building’s name is inspired by the location’s history, and we’re excited to build upon this legacy while honoring the past — bringing new office, retail, and restaurant options to the heart of Uptown.”

“These renovations will completely transform the street-level activation and have been carefully designed to deliver an exceptional tenant and pedestrian experience,” said Sagar Rathie, managing director of commercial office development at Crescent Communities. “The entire retail exterior will be replaced with a drastically improved storefront, including new masonry, exposed steel beams, and large glass windows. The main entrance will step back to an expanded, open air plaza and rejuvenated atrium, enabling the enclosure of the building’s corner for a marquee restaurant opportunity. We’re thrilled to begin these exceptional improvements to one the most prominent intersections in Uptown.” 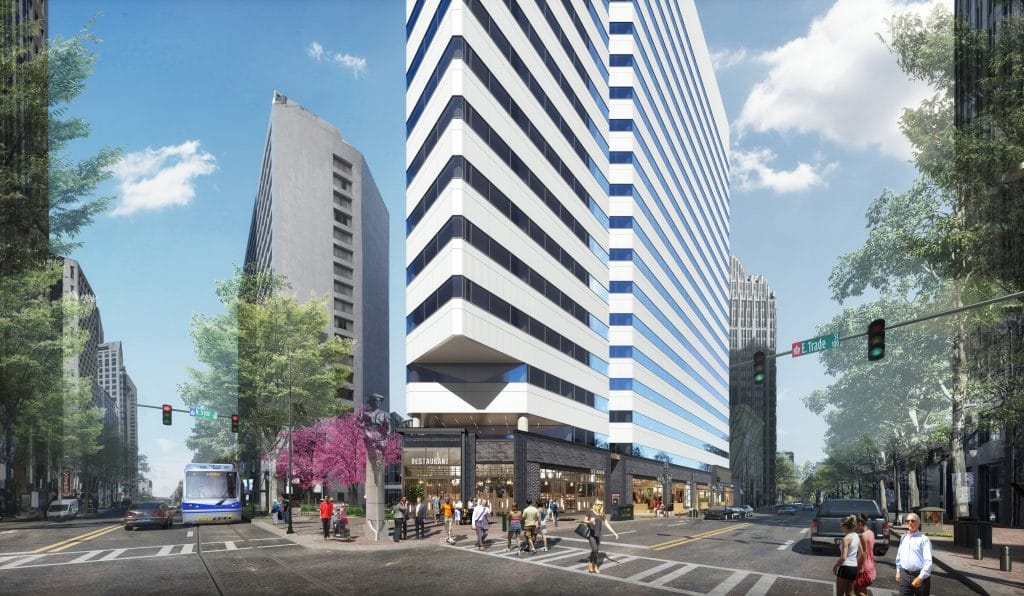 One Independence Center is on the former site of the Independence Building at Charlotte’s Independence Square. Once a 186-foot skyscraper in Charlotte, the Independence Building was originally built in 1909 by J.A. Jones Construction before being demolished in 1981. The Trade and Tryon street corner was also once home to upscale department store Ivey’s, which was preserved and converted into a boutique hotel. It was founded in 1900 and remained in business as a Charlotte retail and restaurant hub for more than 90 years. Inspired by its neighbor’s history, Crescent Communities will use Ivey’s as a source of inspiration for the renovations, aiming to revitalize the address while honoring its past.