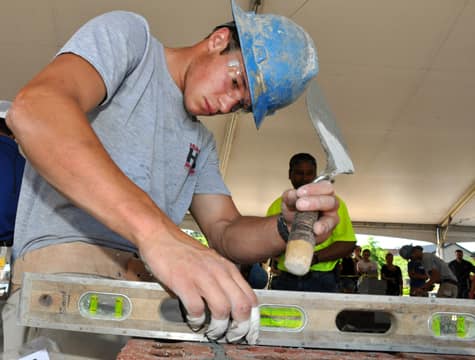 The May 18 contest was held at Triangle Brick Company, which hosted the event along with the NCMCA Raleigh Chapter. Thirty-one contestants from eight NCMCA member firms competed.

Contestants had two hours to build a predetermined masonry panel later judged for measurement, range, level, plumb, proper design and other criteria by a team of experienced journeymen masons. Top-ten scores ranged from 1003 points to 943 out of a possible 1050. The McGee Memorial Contest is one of the very few apprentice contests in the country that only allow two hours for construction. Most are three hours or more.

The “third time is the charm” for Jace. He competed in the 2017 and 2018 contests, finishing in eighth place in 2018. 2019 completes his eligibility for the McGee contest. Winning the McGee competition earns him the opportunity to represent North Carolina at the Mason Contractors Association of America (MCAA) International Skills Competition in February 2020 at the Las Vegas World of Concrete.

Jace is the third child of Chet and Donna Huntley, one of six. He has one sister, Jade, the oldest, and four brothers Jansen, Cannon, Dash and Gunner. Jace graduated Penn Foster High School one month before turning 16 and began working for Huntley Brothers upon graduation. His supervisor is Robbie Watson and Chaney Huntley is his foreman. Jace works as an assistant foreman.

Dad Chet Huntley says, “Outside of work, Jace loves CrossFit and basketball. Jace and three of his cousins bought a 16-passenger Moomba ski boat last year and he loves to wake-board in the summer. And snow board in the winter, which his mom thinks he is a little reckless on. He is always doing something.”

“Sam’s mantra, ‘Fame, Fortune, and Glamour,’ as a way to keep young folks excited and involved in wanting to be a part of the masonry industry is deeply ingrained within me.  We certainly had “Fame, Fortune, and Glamour” for all of the contestants (at the contest.) To me, the event was like watching a great athletic event that came right down to the wire. I believe that is exactly how Sam wanted the competition to be.”

Samuel Alexander McGee (1939-2015) was co-founder and President of McGee Brothers Company in Monroe. Recognized as an innovator in the industry, he was inducted into the Masonry Contractors Association of America “Hall-of-Fame” in 2014. He was inducted into the National Masonry Instructors Association “Hall-of-Fame” in 2012 and was among the first individuals to earn the designation “Certified Masonry Executive” in the NCMCA Masonry Contractor Certification Program. He had a passion for the masonry industry and for encouraging and teaching young people craft skills, especially masonry. In recognition of his contribution and dedication to masonry in the Carolinas, the annual contest is named in his memory. 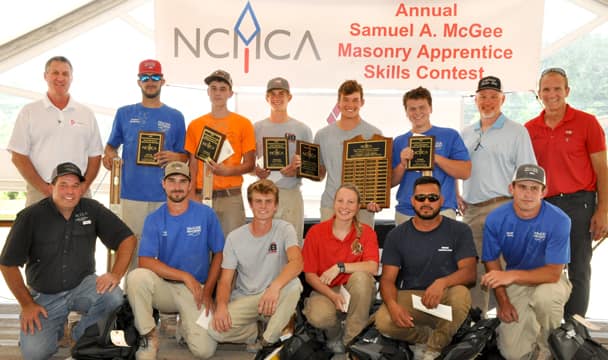 The apprentice that finishes with the top score in the contest is presented the “David R. Sigmon Award” as first place finisher of the Samuel A. McGee Memorial Apprentice Skills Contest. The award is named in memory of David Sigmon, a journeyman mason from Hickory who passed away in 1998 while serving as NCMCA president-elect and who had been active in promoting this contest and other programs around the state to recruit and develop young craftsmen for masonry careers.

Every contestant took home cash and tool prizes thanks to the contributions of NCMCA member firms and friends who also provided labor, equipment and materials.

The NCMCA was chartered in 1974 and works on behalf of the industry and its employees to promote masonry as the building material of choice and as a great career opportunity. For more information, visit www.ncmca.com