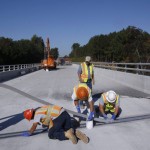 The  2.3-mile stretch of road that bridges the Neuse  River in Johnston County, slated to be opened on Wednesday, is only a sliver of the $19.4  billion in federal stimulus money being spent in North Carolina, reports the News & Observer.  The two-lane Johnston County road is one of 477 such projects in North  Carolina funded by the American Recovery and Reinvestment Act. The $14.3 million two-lane project has pumped money into a struggling  economy, much of it into a construction industry decimated by the downturn.

The money paid for concrete girders to be poured in Charlotte, a rock  quarry to be mined near Benson and provided work for more than a dozen  subcontractors from Mount Airy to Maysville. The Johnston County project appears to have added only a few new jobs in a  state with a persistently high unemployment rate. But it did keep things from  getting worse, say people involved in the project.

The Johnston County project was one of the first North Carolina projects  funded by the stimulus package, in part, because it was already on the state  Department of Transportation’s plans and was “shovel ready.” The project, approved July 1, 2009, extends Booker Dairy Road, crossing the  Neuse River to U.S. 70 business, providing a new east-west route, relieving  traffic through downtown Smithfield. Smithfield officials have clamored for the project for 15 years as a much  needed second crossing of the NeuseRiver.

“It will have better access for a number of schools, for economic development  areas,” said Rick Childrey, president of the Greater Smithfield-Selma Chamber of  Commerce. The project, which crossed the Neuse River and environmentally sensitive  wetlands, required four bridge crews to construct a 3,000-foot span. Although it  was in Johnston County, the project had a ripple effect across the state.

For Wilson road construction  company S.T. Wooten, it meant 67 employees on the project – providing work for  existing employees as well as hiring 12 new workers. This wasn’t a make-or-break  project for a company with 1,000 employees and with many major projects,  including the toll road being built in western Wake County. But it was welcome  nonetheless. “If it had not been for that, we would have had to lay off people,” Nelson  said. “It was a big impact for our company as well as for our suppliers.” Crane operators, bulldozer operators, backhoe operators, skilled laborers,  roller operators, skilled carpenters, concrete finishers, supervisors and  project management staff were among those who worked on the project.

It also meant work for 107  subcontractors for S.T. Wooten. Subcontractors based in Mocksville, Indian  Trail, Mount Airy, Kinston, Fayetteville, Kannapolis,Cary, Maysville and  Winston-Salem worked on the project. There were 90 to 100 people  employed by suppliers. Supplying the concrete girders for the bridge was  Charlotte-based Prestress of the Carolinas. Last year, a crew of between six and  10 people worked for up to 40 weeks at the Charlotte plant pouring 96 concrete  bridge girders – all more than 100 feet long and weighing as much as 116,000  pounds each. No extra workers were hired. “There were times in the last few years where we were sitting here wondering  where our next job was going to come from,” said Jeff White, assistant plant  manager for Prestress. “This gave us some breathing room.”

Providing  48,000 tons of crushed stone for the project was Martin Marietta Materials, a  Raleigh-based company that is one of the largest suppliers of asphalt and rock  in the country. The job kept 12 people working for the equivalent of a month at  the company’s Benson quarry. The firm also contracted with independent haulers  who made 2,400 trips, each truck averaging about 20 loads between the quarry and  the road project. “We need more of them,” Paxton Badham, a Martin  Marietta executive, said of the project. “It is this and other jobs that keeps  them working.”  Overall, S.T. Wooten officials estimate it spent $2.7 million buying  construction materials from North Carolina companies, plus another $6,000 on  copies of plans, safety vests, hard hats and other supplies.

There are no precise numbers on how many jobs were  created or preserved in North Carolina by the stimulus package. The state recovery office has tracked the effects of stimulus spending in  North Carolina for the past two years. The office’s best guess is that about 25,000 North Carolinians have worked –  either through jobs created or jobs preserved over that period, said John  McHugh, who worked as a senior analyst for the office.  McHugh believes the 25,000 jobs figure provides an incomplete picture because  it excludes the effect of major portions of the stimulus package.

It doesn’t include jobs created through loans and grants made to businesses  through various stimulus programs. The stimulus office estimates 9,600 North Carolina jobs were saved and  another 4,600 were created through such programs.  Read More.