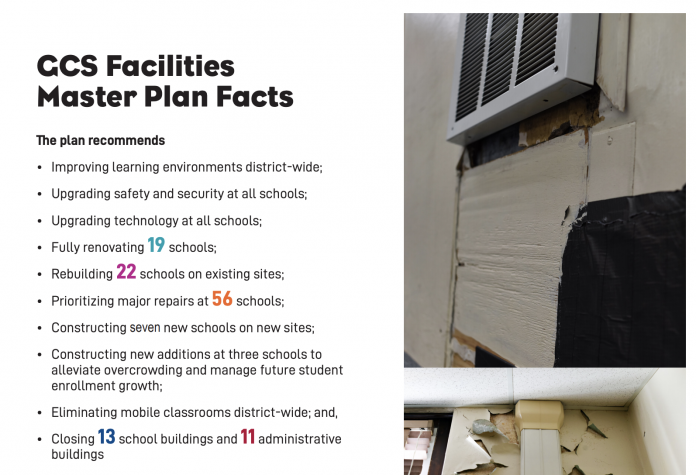 Consultants have proposed a $2 billion Guilford County Schools facilities master plan that “would touch on every school in the district, with major projects to rebuild Page and Southern high schools and create a new high school in the county’s ever-growing northwest area,” the Greensboro News & Record reports.

If the master plan developed by Cooperative Strategies is implemented, the district would eliminate more than 500 mobile and temporary classrooms. Most of nearly a dozen scattered administrative offices would relocate into one facility.

This long-term project would require 10 to 15 years to complete, possibly in two or three phases of five years each.


School administrators shared the proposal on Nov. 26 with a joint facilities committee that includes county commissioners and school board members. They plan to discuss plans to pay for the proposal at a meeting on Dec. 19, the News&Record reported.

Cooperative Strategies partner David Sturtz was quoted as saying that the average school building in Guilford County dates to 1966. Many of the district’s schools were built in the ’50s, ’60s, and ’70s and are now in poor shape.

Workers would build a new $86 million Page High School on the site of neighboring Cone Elementary, which would be demolished under the proposal. The existing Page would be torn down and that area turned into athletic fields.

Southern High would be rebuilt on its existing site for about $55 million.

“The plan also calls for constructing seven new schools, including a new $71 million high school in the booming northwest area of the county to alleviate crowding at Northwest High School,” the published report says. “The new high school would be an aviation magnet high school, with 800 seats for students from its attendance zone and another 400 for interested students from elsewhere in the county.”