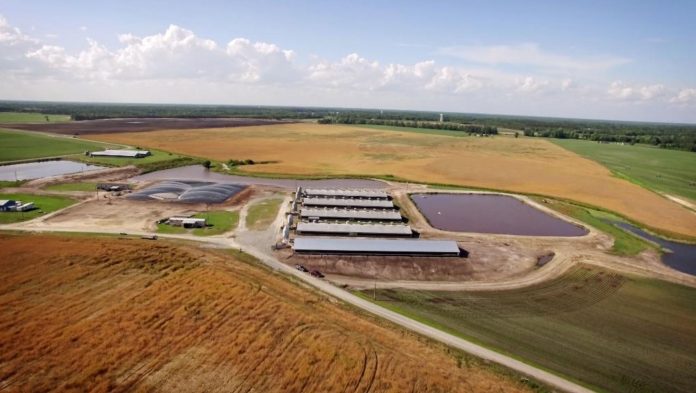 A pair of companies have teamed up on a joint project to create the state’s largest renewable natural gas project.

Dominion Energy and Smithfield Foods, Inc. (a pork and hog producer) have formed a joint venture known as Align Renewable Natural Gas (RNG) that will, upon completion, generate enough energy to power more than 3,500 homes by capturing methane emissions from hog farms and converting them into RNG.

Based in Duplin and Sampson counties, the project will install technology across as many as 19 area farms to transform manure into RNG that will be processed and injected into existing natural gas distribution systems.

The way the capture and conversion system will work is that hog waste will be captured and stored in covered “lagoons,” then the waste will be flushed or transferred to a covered lagoon where anaerobic digesters break down solids, releasing methane gases in the lagoon. Then, that gas is captured inside the lagoon and moved into a processing facility where the methane gas is converted into renewable natural gas which is then injected into the pipeline for distribution.

“This project implements proven ‘manure-to-energy’ technology across a number of farms to produce reliable renewable energy for our community and contributes to our company’s ambitious goal to reduce our greenhouse gas (GHG) emissions 25% by 2025.”

This project is modeled after the Optima KV project, which captures biogas on five Smithfield contract farms in North Carolina, and similar projects on Smithfield farms in Northern Missouri and Utah.

“We’re using the power of innovation to make our energy cleaner and our farms more sustainable than ever before,” Courts continued. “With renewable natural gas, everyone wins. It’s good for the environment and our planet. It’s a huge win for the farmers. And it’s around-the-clock renewable energy for consumers.”

DOT to widen stretch of U.S. 421/Interstate 40 Business in Kernersville

Submit your favorite blog in the AEC community