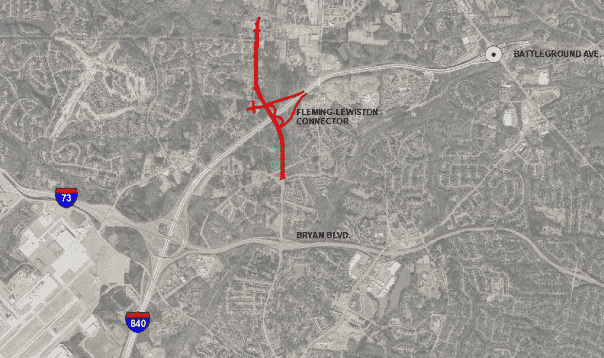 The Greensboro Urban Area Metropolitan Planning Organization (MPO) is seeking input on a proposed amendment to the 2045 Metropolitan Transportation Plan (MTP) to remove a planned connector street between Fleming and Lewiston roads.

The MPO is seeking input on whether to retain or remove the connector and interchange after a site developer is proposing to develop on land east of the Urban Loop over which the proposed Fleming-Lewiston Connector would be built. The developer has requested the MPO consider removing the project from the Metropolitan Transportation Plan (MTP) and Thoroughfare Plans.

An interchange is also proposed in the 2045 MTP and would subsequently be built after the
connector was built. However, if the connector is not built, the proposed interchange would also be
removed. You are invited to provide your input on the decision making process.

The amendment also proposes removing a proposed interchange at the connector road and the Urban Loop. Comments can be submitted until Aug. 5 at 5 p.m. or at the Aug. 10 virtual meeting of the MPO Transportation Advisory Committee.

The 2045 MTP identifies surface transportation projects recommended for construction through the year 2045.