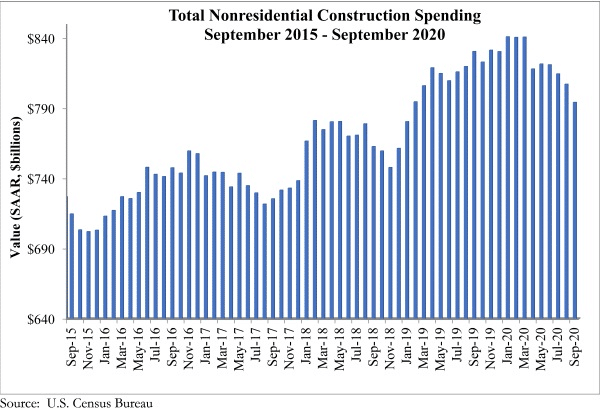 A small increase in total construction spending in September masked a widening gap between declines in most nonresidential segments and robust gains in residential construction, according to an analysis by the Associated General Contractors (AGC) of America (of government data released on Nov. 2.

On a seasonally adjusted annualized basis, monthly spending totaled $794.3 billion, the Associated Builders and Contractors (ABC) reported in its own summary of the data.

Association officials warned nonresidential construction is headed for an even steeper slump unless officials in Washington enact relief promptly, noting that their latest industry survey found three out of four respondents had experienced a postponed or cancelled project since the start of the pandemic.

“The September spending report shows the gulf between housing and nonresidential markets is growing steadily wider,” said Ken Simonson, the association’s chief economist. “In our October survey, 75 percent of respondents reported a postponed or cancelled project, up from 60 percent in August and 32 percent in June.”

Construction spending in September totaled $1.41 trillion at a seasonally adjusted annual rate, an increase of 0.3 percent from the pace in August and 1.5 percent higher than in September 2019. Private and public nonresidential spending slumped by a combined 1.6 percent since August and 4.4 percent from a year earlier, while private residential spending climbed by 2.8 percent for the month and 9.9 percent year-over-year.

Association officials noted that the coronavirus was having a significant, negative impact on most commercial construction firms. In addition to widespread project delays and cancellations, the association’s recent survey found most contractors do not expect to expand their headcount during the next 12 months because of the pandemic. Many contractors report they are looking to Washington to enact new infrastructure investments and liability reforms to offset the ongoing impacts of the coronavirus.

“The pandemic is suppressing demand for new office buildings, hotels and shopping centers even while it inspires many people to build bigger homes,” said Stephen E. Sandherr, the association’s chief executive officer. “Without new federal investments in infrastructure and other needed relief measures, commercial firms will have a hard time retaining staff or investing in new equipment and supplies.” 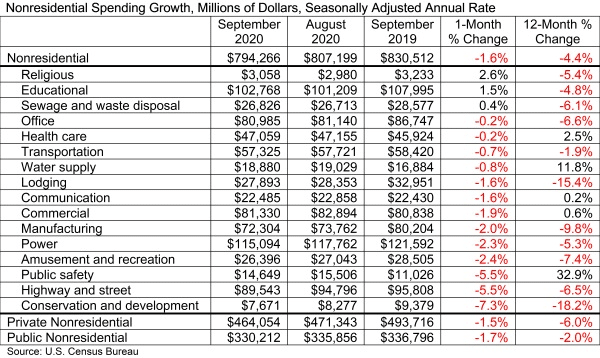 From the non-union ABC’s perspective, “the pace is of decline in nonresidential construction spending is accelerating,” said that association’s chief economist Anirban Basu. “This is precisely what had been predicted.

“Though the initial phase of economic recovery has been brisk, economic outcomes are likely to deteriorate markedly during the months ahead absent further stimulus,” said Basu. “That would further delay nonresidential construction’s eventual recovery. Nonresidential construction spending is down 4.4% from the same time last year, with lodging-related spending down more than 15% and office-related spending down nearly 7%. These are among the segments hardest hit by social distancing directives, and another round of shutdowns would further exacerbate declines in these and other segments.

“The hope is that policymakers in Washington, D.C., will soon see fit to deliver on a long-awaited infrastructure financing and spending program,” said Basu. “Not only would that accelerate the broader economy’s economic recovery, a well-executed infrastructure package would make American workers more productive, unleash new private development opportunities and allow America to better compete in the global marketplace. The longer America has to wait for such a package, however, the more vulnerable its citizens will be to further economic dislocations.”