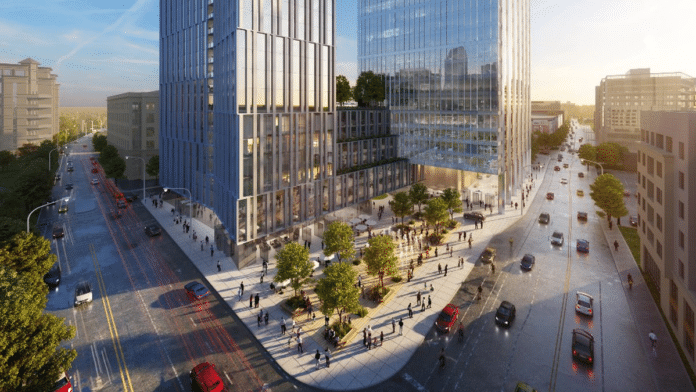 The estimated value is upwards of $750 million, WBTV reports.

The proposed development will combine commercial and residential uses, and what are described as “large, outdoor open spaces, dynamic retail and cutting-edge sustainability, health and wellness features” on the block at the intersections of East Morehead Street, Morehead Square Drive, South Tryon Street, and East Carson Boulevard.

“We are very excited and honored to join the Charlotte business community and help transform the area between Uptown and South End, creating a world-class live-work-play environment that will contribute to the city’s already impressive growth story,” said Riverside’s chief operating officer Anthony Scacco. “We look forward to continuing our partnership with local officials to ensure thoughtful urban planning at this important location.”

Riverside officials say they have been working closely over the past year with the City of Charlotte Transportation Department (CDOT) and the North Carolina Department of Transportation (NCDOT) on analysis for replacing the existing College Street Connector with enhancements to the surrounding street grid.

Officials say these streets would be widened and, in the case of Morehead Square, be realigned to maintain northbound vehicular flow to College Street north of Morehead Street.

“Going into the process of acquiring this premier site, we knew that successfully replacing the connector’s functionality would be of critical importance. Charlotte’s CDOT and Planning departments have been clear about their expectations for this redevelopment, and we are very proud of the streetscape, open space, and right of way enhancements that will result from our proposed plan,” Scacco said.

Chicago-based Riverside says it plans to initiate its southeast regional office in Charlotte in mid-2022. Construction is expected to start by the end of the year.