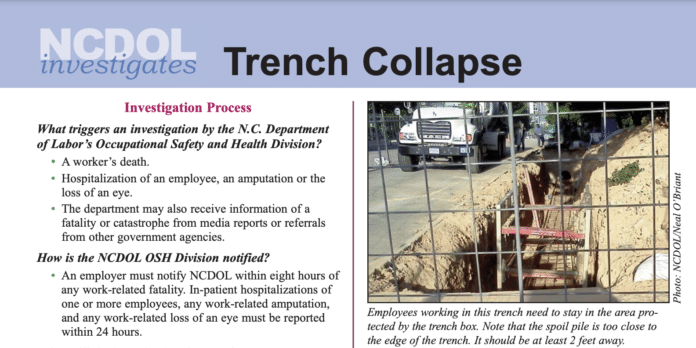 The North Carolina Department of Labor (NCDOL) has fined a contracting business $39,200 after investigating a trench collapse that killed a construction worker in May.

The NCDOL fined Barnes Backhoe & Grading Inc., based in Taylorsville, after a six-month investigation. Department spokeswoman Natalie Bouchard told the Charlotte Observer the state cited the company “for one alleged willful serious violation and four alleged serious violations of the Occupational Safety and Health Act of North Carolina.”

“The General Statutes say that the Labor Department has to take into consideration various factors such as the gravity of the violation, the size of the business, the good faith and cooperation of the employer, and the history of previous violations,” Bouchard wrote in an email.

“The penalties are in no way designed to make up for loss of life,” she said. By law, money from such citations goes to a civil penalty and forfeiture fund, with monies distributed to public school systems, Bouchard said.