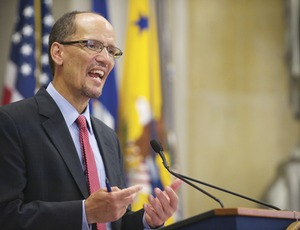 As Thomas E. Perez begins work as the Dept. of Labor’s new secretary, construction industry and union groups are waiting to see when the DOL will act on key regulatory issues and what it will say. Some pending or possible rules would apply to all industries; others focus on construction.  Perez, sworn in on July 23, oversees agencies that are important to construction, such as the Occupational Safety & Health Administration and the Office of Federal Contract Compliance Programs (OFCCP).

Engineering News-Record reports major OSHA construction-related rules are pending include a confined-space regulation, expected to be made final in December, and changes to its 2010 crane-safety rules. Also in OSHA’s pipeline is a long-awaited new exposure standard for silica dust. The Office of Management and Budget is reviewing a draft proposal. Richard Greer, spokesman for the Laborers’ International Union of America (LIUNA), says the union has long pushed for the new standard and that it “would definitely be one of our priorities during [Perez’s] tenure.” Other possible future OSHA actions include revised decompression tables for tunneling workers and an all-industry standard to prevent vehicles from backing over workers.

Kennedy also points to two proposed OFCCP affirmative-action rules for federal contractors, issued in 2011. One deals with veterans. Groups such as the Paralyzed Veterans of America support its general thrust. The other focuses on people with disabilities. Supporters include the Disability Rights Legal Center.

Kennedy says industry firms want to recruit veterans and do not seek to exclude the disabled, but he contends the DOL proposals “would be extremely expensive to implement and, frankly, at the end of the day, probably hurt [their] cause more than help it.”

Burr highlights a 2011 DOL proposal to expand reporting requirements for companies that use outside consultants, or “persuaders,” for advice on possible union-organizing situations or collective bargaining. Burr says, “What we fear is that this would be an attempt to chill employer speech.” Greer says, “We would support broadening the rules to protect the ability of workers to make a free choice on joining a union.” Read More.