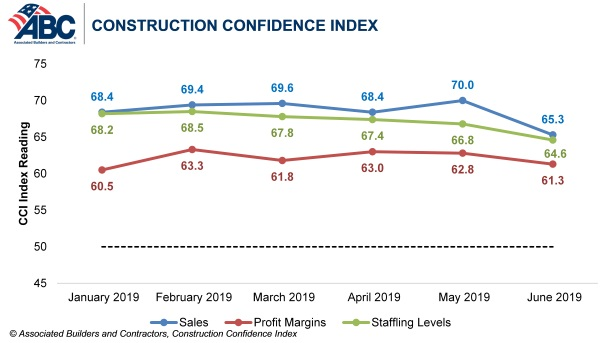 While contractors are less optimistic regarding sales, profits and staffing levels on a monthly basis, all three principal components measured by the survey remained well above the diffusion index threshold of 50 in June. Nearly 67% of contractors expect sales to rise during the next six months, while more than 59% expect staffing levels to increase and 54% expect profit margins to expand. 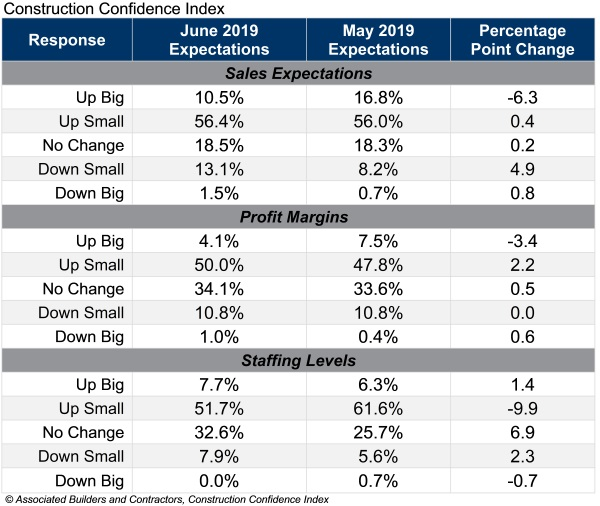 “Economists near and far are searching for signs of the next economic downturn,” said ABC chief economist Anirban Basu. “Among the signals are increasingly volatile financial markets, an inverted yield curve, unemployment that sits meaningfully below its natural rate and a variety of indicators suggesting that the global economy continues to soften. Many economists continue to predict recession within the next one to two years.

“Therefore, when there is positive news on the economy, whether in the form of solid job creation numbers, strong retail sales or the Construction Confidence Index, it is worth taking note,” said Basu. “While many will continue to fret about the impacts of ongoing trade disputes, rising levels of indebtedness, Brexit, Iran and other forces, nonresidential construction is positioned to remain a driver of positive economic growth.

“What is perhaps most impressive is the expectation that profit margins will continue to rise,” said Basu. “This is an indication that contractors continue to enjoy pricing power, helping to offset the impacts of rising wage pressures. Even with wages rising, more contractors expect to add people than to subtract them, another reason to believe that for now, the U.S. expansion remains firmly in place. This is further supported by indications that sales of nonresidential construction services continue to expand.”

CCI is a diffusion index. Readings above 50 indicate growth, while readings below 50 are unfavorable.