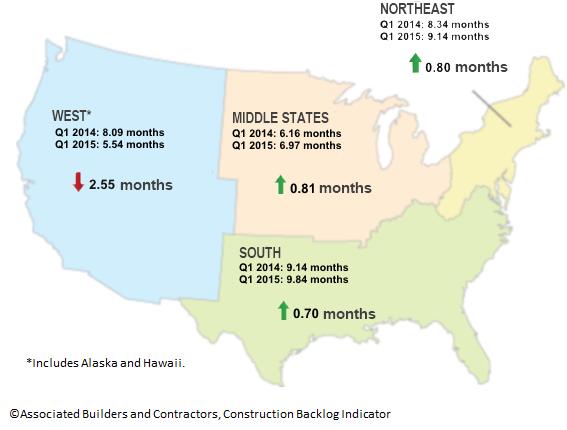 The construction backlog increased by 5.9 per cent in the southern states (an area which includes North Carolina) in the first quarter of 2015, even as the national backlog declined by 3.2 per cent.

The main reason for the discrepancy — a whopping 25.3 per cent change — occurred in the west, possibly caused by weather conditions, as well as the sharp slump in the oil industry, according to the Associated Builders and Contractors (ABC) Construction Backlog Indicator (CBI).

Construction firms report a revenue-weighted average CBI of 8.4 months, 0.3 months below the fourth quarter of 2014 reading. Year over year, CBI has increased 4 percent from the first quarter of 2014 backlog of 8.1 months, ABC reported.

“Weather and a myriad of other factors always make the first quarter CBI difficult to interpret,” said ABC chief economist Anirban Basu. “A brutal winter may have postponed project-related work, including the signing of contracts. The first quarters of 2012 and 2014 also experienced CBI declines that effectively were reversed during the ensuing second quarters.

“However, there is a reason to believe seasonal forces were not the only factor in reducing CBI,” Basu said. “Sharp reductions in oilfield investment impacted a number of companies in the Middle States, while firms in the West appear to have been disproportionately impacted by the West Coast port slowdown. Weather and the port slowdown represent temporary factors, implying that backlog should re-establish an upward trajectory during the months to come.

“Construction was hardly the only segment of the economy to be impacted by weather, labor disputes and lower energy prices,” said Basu. “The entire macro-economy failed to expand during the year’s initial quarter. Still, economic fundamentals remain relatively strong. Job growth continues to expand, unemployment is below 6 percent and wage gains are steadily building. With fuel prices still low, consumer spending is positioned to remain the primary driver of economic expansion. Residential construction also has picked up in recent months, with even the single-family market showing signs of life.”

It appears that the impact of the West Coast port slowdown was far greater than most economists imagined. While the West Coast ports play a significant role nationally, they are of particular importance to regional markets such as Los Angeles, Seattle and San Francisco. Contractors in these areas reported sharply softer backlogs during the first quarter, particularly among large commercial construction firms that depend heavily on the delivery of materials coming from abroad. This is likely to be reversed during the second quarter, at least in part. The presumption is that many ongoing construction projects in the West will be delivered behind schedule due to unavoidable supply chain interruptions.