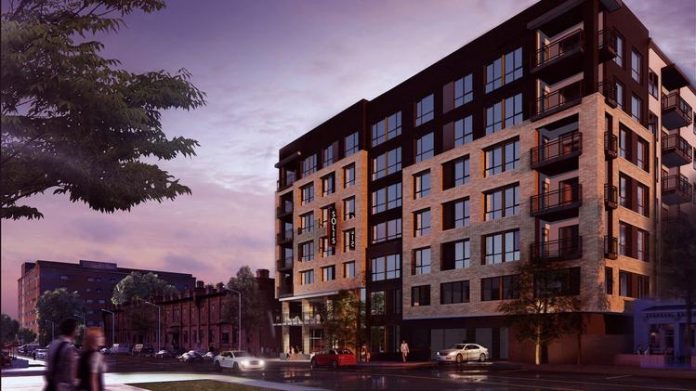 Construction has started on the 194-unit Solis Brighleaf apartment building in downtown Durham.

County records indicate that Pittsburgh-based F.N.B. Corporation is providing a maximum $62.4 million in construction financing for the project at 1005 W. Main St., Triangle Business Journal reports. The project should be completed in late 2018.

The project is next to the landmark Brightleaf Square dining and retail destination, formerly the site of the now-shuttered Howerton-Bryan Funeral Home, which an affiliate of Terwilliger Pappas finalized purchasing on  June 16 for nearly $4.1 million, according to county records.

Triangle Business Journal says Solis Brightleaf is the company’s second major development project in Durham – its third in the Triangle – following the completion of Solis Ninth Street and the Solis Crabtree apartment project in Raleigh. “Terwilliger Pappas sold the 292-unit Solis Crabtree (now called Marq at Crabtree) for $58 million, or $198,000 per unit, within weeks of its completion in 2014,” the publication reported. “It sold the remainder of its equity ownership in the Solis Ninth Street project to a fund managed by Raleigh-based Blue Heron Asset Management on June 4. Terms of that deal were not disclosed.”