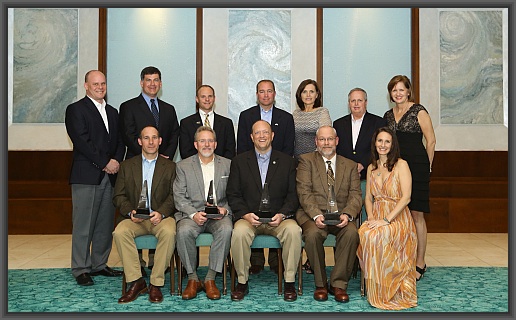 The underpass provides a safe, beautiful passage through the railroad property for students, faculty, and local residents. It also serves as a link for UNCG to its upcoming mixed-use development initiatives along the Lee Street corridor. The 30,619-square-foot Railroad Pedestrian Underpass project consisted of 3 major sections. The project finished below budget with a zero recordable incident rate and zero lost time.

The Honorable North Carolina Representative Dean Arp was given ‘Build With The Best Award’.

Along with Carolinas AGC and other organizations including architects and engineers, Representative Arp worked to pass House Bill 857, known as the Design-Build/P3/Prequalification Study. As chief sponsor of this and related legislation, his leadership ensures greater equality for the construction industry at a time when many local design-build bills had been introduced with few, if any, parameters.

The CAGC Pinnacle Awards competition is co-sponsored by GreerWalker LLP and the law firm of Johnston, Allison & Hord. The Pinnacle presentation was made at CAGC’s 94th Annual Convention in Paradise Island, Bahamas.

(North Carolina Construction News will feature extensive coverage of the 2014 Pinnacle Awards in the May/June issue.)

NCMCA Apprentice Skills Competition scheduled for May 18 in Durham