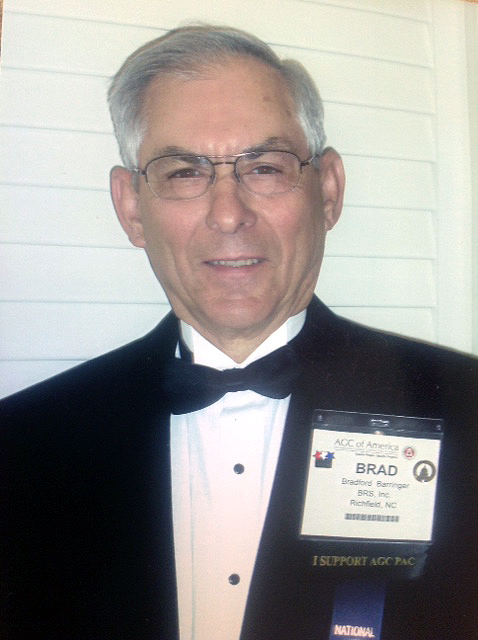 Brad Barringer, retired President of BRS Inc. in Richfield, has been awarded the Associated General Contractors (AGC) of America’s Past President’s Lifetime Achievement Award during the recent AGC annual Convention in New Orleans.

The award honors an AGC member who has demonstrated, over an extended period of time, extraordinary commitment to AGC and the construction industry, The Carolinas Associated General Contractors (CAGC) reports. “This award is not presented every year. It is only presented when all past presidents agree that the recipient spent a lot of time, energy and treasure making the construction environment better for all of us. Brad met all of the criteria,” CAGC reported. “He is always committed, always tenacious and always blunt.”

“The construction industry is better, and safer because of Brad and his hard work and passion,” AGC president Art Daniel said. “He, like many of us, cares about his employees and Brad works to keep them safe.  When agency regulations threatened more harm than help, Brad educated regulators on how to make their rules more effective.  He looked for inequities that could hurt good people and hurt good contractors and let his passion lead the way.”

CAGC says that when Barringer recognized contractors were being held responsible for damages to underground utilities because of other’s failure in the 811 process, he was determined to hold all stakeholders accountable for their respective responsibilities.

“Brad knew first-hand that there were a lot of variables to consider whenever there was an accident.  He wanted everyone to admit their portion of the problem and commit to eliminating accidents.  He worked tenaciously at the state and federal level with his chapter, national AGC and in the Common Ground Alliance. It was an uphill battle, but Brad’s tenacity improved safety by forcing contractors, locators and underground facility operators to admit shared responsibility and make safety a priority. This was not a one-year battle, but a constant unrelenting decades long activity that Brad committed to for decades.”

“I couldn’t be more surprised and honored by this award, but I have to recognize my wife Ruby who traveled with me by car, train and plane to meetings across the country for years,” Barringer said at the convention. “BRS stands for Brad, Ruby and Sons, without Ruby we would just be, well you know.”