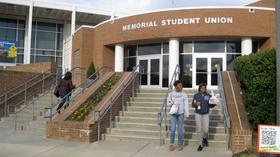 Balfour Beatty Construction, in a tri-venture partnership with D.H. Griffin Construction and C2 Contractors, has been selected as construction manager at-risk for North Carolina Agricultural and Technical State University’s (NC A&T) new, state-of-the-art, 175,000-square-foot Student Union in Greensboro, North Carolina. This is the largest project on NC A&T’s campus in recent years as well as one of the largest on a historically black university (HBU) in the Southeast region.

A beacon for the campus, the Student Union facility will be a modern, glass-fronted structure bridging green space from the University’s Aggie Village Green to Aggie Stadium. It will provide improved and expanded student dining, meeting, recreation/entertainment, lounge, and study areas, along with retail space. The project is being planned and designed as a LEED certified facility.

The development will include significant site work and landscape development, such as existing surface parking reconfiguration, underground utility relocation, storm water management, and street improvements. The project also encompasses demolition of the University’s existing 67,000-square-foot Student Union, which was built in 1969 and last renovated in 2000.

The construction team has established a goal of 30% participation for minority and women-owned businesses (MWBE) on the project. Furthering the University’s objective to build the capacity of a valued local firm, C2 Contractors is a premier minority-owned business headquartered in Greensboro.

“I am extremely excited about the tri-venture partnership with Balfour Beatty Construction and D.H. Griffin Construction,” said CC Lamberth, president of C2 Contractors. “We will achieve the University’s MWBE goals by creating a culture of inclusion, and a two-way expectation of reliability and performance.”

Working in collaboration with C2 Contractors and D.H. Griffin Construction, Calvin Stevens, director of business development and diversity for Balfour Beatty Construction and NC A&T alumnus, will lead the project team’s efforts to meet the University’s goal of achieving a diverse and inclusive workforce.

The tri-venture team is currently completing the project’s design phase in partnership with Raleigh-based Vines Architecture and Boston-based Cannon Design. With a construction start date targeted for February 2014, the Student Union project is expected to complete in the summer of 2017.  Read More.

NC construction worker awarded more than $1 million in damages after...