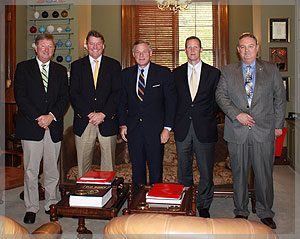 The Carolinas Associated General Contractors (CAGC) nominations committee has announced the slate of association executives for 2017 terms. They include:

Kelby Thornton of Central Cabarrus High School won in the high school/secondary division. He has been instructed by Todd Hartsell.

For winning gold medals, the schools will each receive the $1,500 SPEC MIX “Commitment to Quality” scholarship to support masonry training programs.

Chris Paone was presented with a plaque at the June meeting showing the NCSA’s appreciation for the service and dedication that he has shown over the last two years as president.

Nominations have opened for this year’s CAGC Pinnacle Awards.

CAGC says the awards are “the most prestigious recognition in the Carolinas construction industry,” honoring the work of general contractors and their projects’ key partners.

A panel of CAGC member representatives evaluates – in confidence – the work of their peers. The awards are presented at the CAGC’s annual convention.

There are two types of awards; project awards and the “Build With the Best Award.”

Project awards are in categories for projects less than and more than $5 million in building, highway heavy projects, and utilities.

“Along with their detailed narrative, GCs (general contractors) are encouraged to also honor the work of specialty contractors, supplier/service companies or architect/engineer/owners whose contribution was critical to a project’s exemplary nature and success,” CAGC says. “If the project wins, these partners are honored with a Partners in Excellence award.”

Meanwhile, the Build with the Best Award “honors the contributions of a non-contractor individual for his or her role in advancing the construction industry and the overall Carolinas economic welfare, whether from outside the industry altogether or from our own Carolinas AGC supplier/service company membership sector.”

Further information and nomination details are available from the CAGC website at this link.

The annual Associated Builders and Contractors (ABC) of the Carolinas Excellence in Construction banquet will take place on Nov. 17. Judging begins on Oct. 19 and 20 and the winners will be notified at the end of October (with the exception of the Project of the Year winners, who are announced at the annual awards banquet.) For more information, see http://www.abccarolinas.org/en-us/membership/eic.