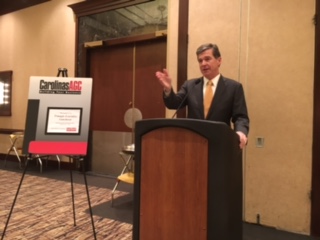 He stressed that business is most concerned about access to a trained workforce and specifically mentioned the construction industry’s labor shortage, the CAGC reported in its newsletter.

“We need to work with high school students and let them know these good paying (construction) jobs are there and that it’s o.k. not to have a four-year degree. I want to work with you (CAGC) on this effort,” Cooper said.

Cooper also emphasized the need for more infrastructure investment and commended CAGC for its part in helping pass the Connect NC bond referendum and lobbying for additional funding for transportation. “The gas tax alone won’t get us there,” he said. “We need to think about transportation bonds. There’s never been a better time”.

Cooper, a native North Carolinian born in Rocky Mount, spoke of growing up in eastern North Carolina working on the summer farm. After receiving his law degree at UNC Chapel Hill, he opened a small law practice in his hometown but was quickly drawn to public service. He has served in both the NC House and Senate and is in his fourth term as Attorney General.

Several audience members asked how he would work with the majority Republican legislature as well as with the business community, CAGC reported. While Cooper conceded that the two sides (Republicans and Democrats) have never been more polarized, he believes he can effectively work across party lines. “I’ve done this before when I was Senate Majority leader and the House was Republican. It just requires willingness to compromise”.

Weaver was selected by the faculty for his leadership, involvement, and academic performance and was instrumental in NC State being recognized nationally for several student initiatives. He is joining the construction industry as an employee with long-time Carolinas AGC member Crowder Construction Company of Charlotte. This annual award has been sponsored for many years by Carolinas AGC.