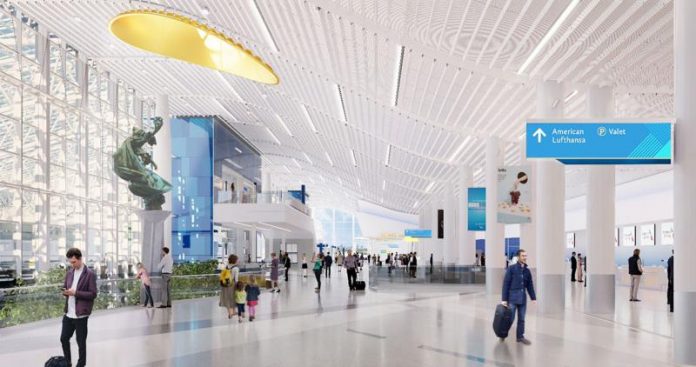 With the busy holiday travel season over, a $600 million expansion is underway at the Charlotte Douglas International Airport.

The lobby expansion will include two overhead pedestrian walkways and two underground walkways connecting the hourly deck to the terminal. Construction is expected to last more than five years and be finished in 2025, according to the airport.

Also, the Queen Charlotte statue will be moved to the lobby in 2021, according to the airport.

As part of Destination CLT, a $2.5 to $3.1 billion capital investment program continuing through 2035, the Terminal Lobby Expansion will transform the Airport entrance and create more space in departures/ticketing and arrivals/baggage claim The Airport broke ground on the five-year signature project on Dec. 10.

The Terminal Lobby Expansion is the largest project in the Destination CLT capital investment program and the largest renovation and construction effort in the Airport’s history. This signature project will transform the current lobby and create a dramatic curbside welcome for visitors and passengers alike.

The $600 million lobby expansion is the first makeover to the airport’s main terminal in 40 years.

Phase one includes closing the Daily North Lot so crews can build a central energy plan large enough to supply power for the new lobby. Some drivers who spoke with Channel 9 said they worry about parking at the airport now that the lot is closed.

However, airport officials posted a video on Twitter saying they have a plan.

The goal is to double the area inside the terminal and add a canopy over the roadway in front of the building – space is needed to accommodate 12.5 million passengers a year, which is five times what it was built to handle in 1982.