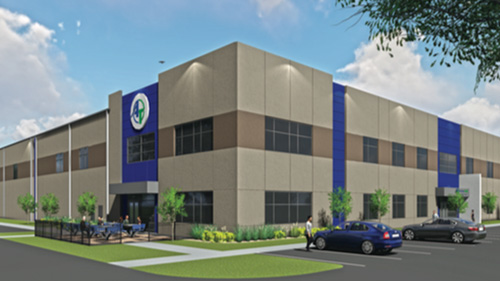 An official ground breaking last week in Statesville marked the start of work on a $38 million 242,000 sq. ft. project for window and door company AmesburyTruth that will allow it to consolidate two existing locations and will result in the creation of 50 new jobs once it opens late in 2017.

Charlotte Business Journal quoted AmesburyTruth COO, James Larson as saying the company would achieve efficiencies internally, and for customers, by moving operations into one location.

Constructed by Ryan Cos. US Inc. of Minneapolis on a 27-acre parcel, the new facility will contain local manufacturing, distribution and office space.

Taking part in the ground breaking, Statesville Mayor Costi Kutteh was quoted as saying he was pleased that the company is staying in town. “A company that says ‘the place where we are is the best choice’ is valued.”

The AmesburyTruth project is the first on a 180-acre tract along U.S. Highway 70 yet to be developed.