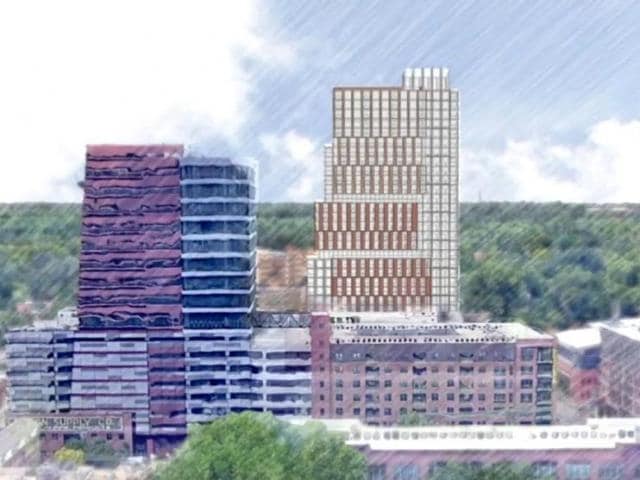 Construction has started on a $275 million, 500,000 sq. ft. bus station and mixed use development in downtown Raleigh.

GoTriangle and developers Hoffman & Associates are partnering on the multi-year project, with a groundbreaking planned for the spring of 2023. The transit station should be completed by mid-2025 and the commercial development is expected to open by early 2026, WRAL-TV reported on April 26.

Initial construction work will focus on site preparation, including preserving some of the existing West Street warehouse’s facade, which developers plan to incorporate into the new structure.

The proposal calls for two high-rise buildings as tall as 40 stories each, along with 400 or more apartments, 18,000 sq. ft. of retail space and 200 hotel rooms.

The new transportation facility will include off-street transit space for local and regional buses and a  pedestrian bridge to connect the to-be-built RUS Bus station to Raleigh Union Station.

“We are excited to start construction on this transformational project,” said GoTriangle president and CEO Charles E. Lattuca. “This unique bus transfer facility linked with Raleigh Union Station will provide critical transit connections for people across the region to get where they need to go. This project is the culmination of collaboration with federal, state, local and private partners to improve transit connectivity, and we thank them for their support.” 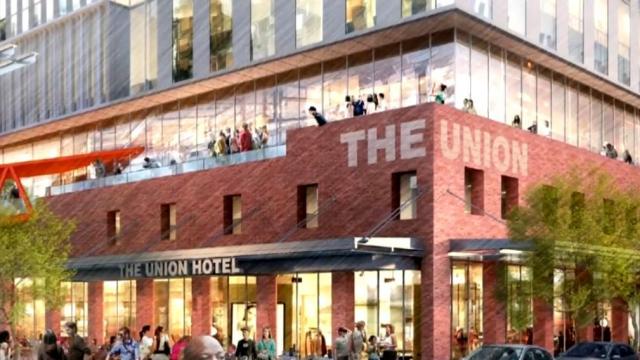 GoTriangle acquired the RUS Bus site – the former Dillon Supply property – in 2005 with support from a Federal Transit Administration grant, Mass Transit reported. The public component of the project, including the off-street transit facility, is funded in part by a $20-million United States Department of Transportation grant, as well as state and county matching funds.

“RUS Bus – linked to Raleigh Union Station – will help us take a giant leap toward our vision of a regional transit network that connects people to opportunities and a choice of travel options,” Raleigh Mayor Mary-Ann Baldwin said in a news release. “Whenever we can build walkable, mixed-use communities connected to transit, everyone wins.”

“We are honored to have the opportunity to work alongside GoTriangle and continue to shape the landscape of downtown Raleigh while enhancing the area’s connectivity,” said John Florian, Hoffman & Associates’ executive vice-president for the Southern regional office. “RUS Bus will serve as a crucial piece in downtown Raleigh’s transportation and connectivity goals alongside a thoughtfully integrated mixed-use development and community space.

“As Raleigh continues to see expansive growth, RUS Bus will deliver expanded services and value to the greater community.”