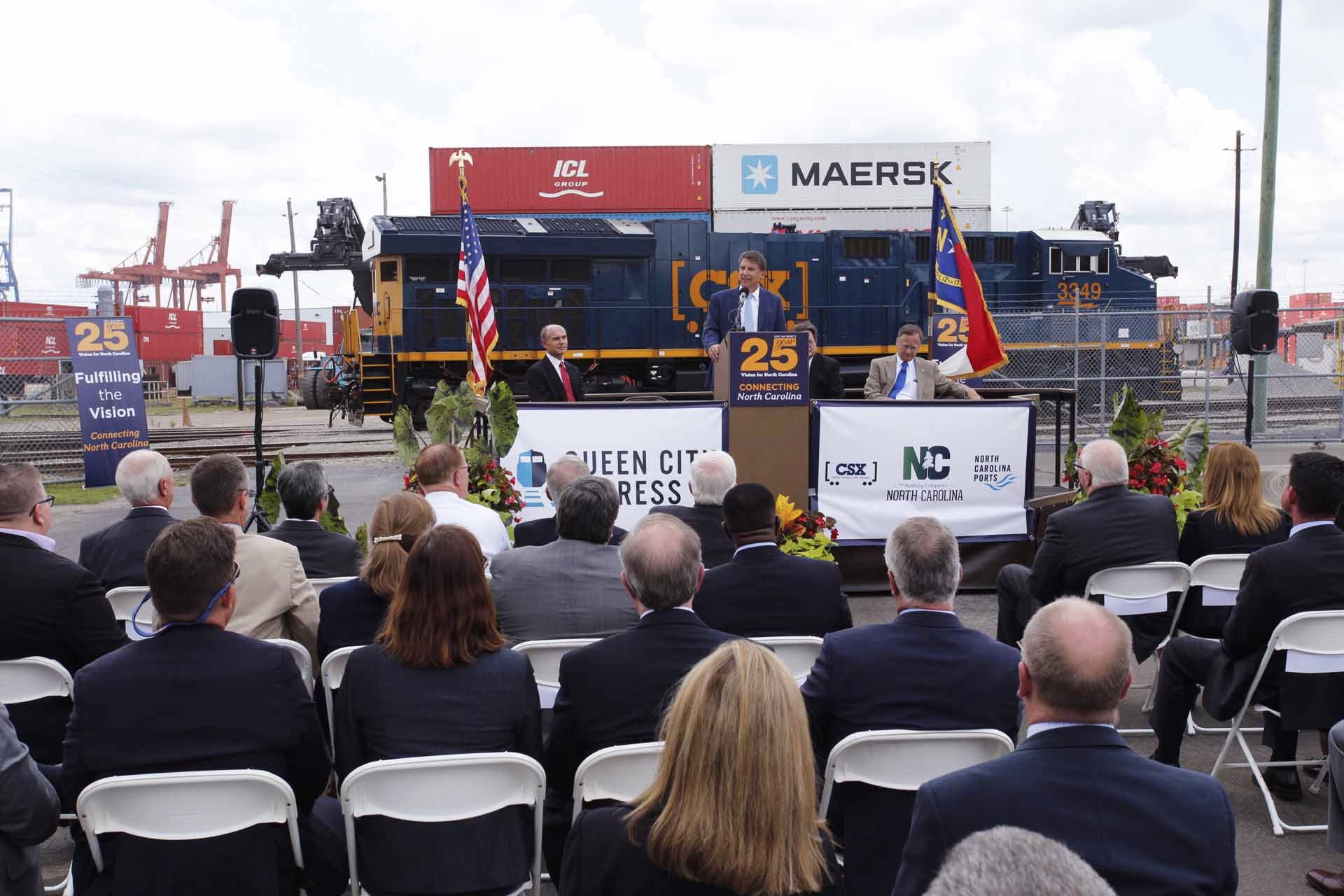 Governor Pat McCrory has announced that CSX will open a new intermodal terminal in Rocky Mount, Edgecombe County. Known as the Carolina Connector (CCX), this critical infrastructure project will bring jobs and economic opportunity to eastern North Carolina and position the state as a leader in enhanced freight movement, a governor’s office news release says.

CCX will transfer containerized cargo between trains and trucks, processing more than 260,000 containers per year initially. Building the facility is expected to create 250 to 300 short-term jobs in engineering, technical services and construction. Conservative estimates indicate that the hub is expected to create 1,500 jobs throughout North Carolina as a result of the terminal’s operations, the governor’s office reported in two July 19 news releases.

CSX will invest $160 million in the project. North Carolina’s Transportation Department will contribute $100 million for track improvements as well as terminal infrastructure through the state’s new transportation funding formula, which McCrory says he championed to take the politics out of transportation planning.

Helping facilitate CSX’s choice of North Carolina for the project is a Job Development Investment Grant (JDIG) approved the same day as the announcement by the Economic Investment Committee. Under the terms of the grant, CSX is eligible to receive as much as $4.3 million in total reimbursements. Payments will occur in annual installments pending verification by two state agencies that the company has fulfilled job creation and capital investment requirements.

“This historic project is part of our 25-year vision for transportation because it facilitates efficient and cost-effective movement of goods, which is critical for job creation and economic growth,” McCrory said in a statement. “The Carolina Connector will be a game-changer for our state’s economy, supporting North Carolina’s agriculture, ports and position as the Southeast’s No. 1 state for manufacturing jobs.”

CSX serves nearly two-thirds of the American population through a rail network spanning 23 states, two Canadian provinces and the District of Columbia. In North Carolina, CSX maintains an intermodal terminal in Charlotte, bulk transfer terminals in Charlotte, Raleigh, Wilmington and Winston-Salem and major rail yards in Hamlet and Rocky Mount.

“In partnership with the State of North Carolina and Rocky Mount, CSX is proud to bring this transformational project to eastern North Carolina which will provide cheaper, faster and more environmentally-friendly connections for North Carolina’s businesses and ports to domestic and international markets. Rocky Mount’s vision for economic development, strategic location on the CSX network, and our existing rail operations and long-standing community ties make it an ideal choice for the Carolina Connector,” said CXS chair and CEO Michael Ward. “We look forward to partnering closely with the Rocky Mount community to create jobs and economic opportunities.”

Intermodal hubs improve efficiency in distributing containerized goods, primarily consumer and household products, from the point of production to retailers and consumers. Transporting goods by rail offers numerous benefits including reduced truck traffic and wear and tear on highways, improved air quality and highway safety, and more environmentally-friendly and cost effective movement of freight. One intermodal train can carry the load of 280 trucks.

North Carolina’s Transportation Department will contribute $100 million for track improvements as well as terminal infrastructure through the state’s new transportation funding formula, which McCrory said he championed to take the politics out of transportation planning.

The hub, expected to open in 2020, and related track improvements are expected to take two years to construct once all necessary environmental permits are obtained. Carolinas Gateway Partnership, the local economic development organization, controls nearly all of the land needed for the facility, which is located along CSX’s main rail line in a primarily industrial area.

Many partners were involved in the development of this project including North Carolina’s Commerce, Transportation and Revenue departments as well as the Economic Development Partnership of N.C., Edgecombe County, the Carolinas Gateway Partnership and North Carolina Wesleyan College.

To further expand the port’s capabilities, the North Carolina State Ports Authority is moving forward with a $100 million investment in infrastructure improvements including new cranes, an enhanced berth and a wider turning basin, with further expansion on the way. The state budget signed by McCrory includes $70 million over two years for modernization at the state ports.

CSX will eventually provide direct access from the Port of Wilmington to the Carolina Connector intermodal terminal in Edgecombe County that McCrory announced earlier in the day.